My GQ award made me realise the sky's the limit

Although there are the inevitable naysayers, I was delighted to receive a GQ award for philanthropy, and it’s made me realise that the sky’s the limit. I am hoping for Best Newcomer at the MOBOs, Miss World 2014 and, most pressingly, Rear of the Year (if only to wipe the smile of the face off that old strumpet Vorderman). Am I being too ambitious?

At the end of last term Jack Price in Year Four won a special prize for being the best at maths. Everyone clapped and he gave a short speech about the benefits of hard work. One hour later, he was ambushed on the way home and had his bag and one of his shoes thrown into the allotments. The moral of the story is that just because youve got a shiny thing with your name on it, it doesnt mean people like you. 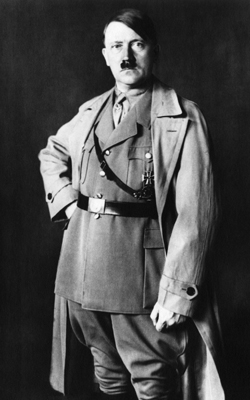 THE dictator who presided over the Third Reich was just like Hitler, it has been claimed.

A new biography has compared the leader of Nazi Germany to Hitler, even describing his military as stormtroopers and his secret service as Gestapo-like.

Hitler author Norman Steele said: Hitler dreamt of world domination and he whipped his supporters up to fever pitch at Nuremberg-style rallies, who responded in a way eerily reminiscent of the Sieg Heil chant.

The more you learn about these people, the more you realise they were just like the Nazis. Theres no other way to describe them – you could say they were the Nazis of the 1940s.

He even had a little moustache.”

However, historian Denys Finch Hatton has criticised Steele for his use of the Nazi metaphor: We see far too much of this sort of lazy hyperbole.

Hitler did some terrible things but he was no Hitler.

“However you should see my cat. He’s got this little black mark under his nose, the resemblance is quite uncanny.”