Our friends expect an obscene display of wealth

I’m getting married to my fiancée in May and she has left me to organise the whole wedding (for some reason it’s old hat to her). Everyone will be expecting an over-the-top, vulgar show of obscene wealth and distastefully decadent bling. However, I notice that the Travelodge near PC World in Staines is doing a really cheap deal on weddings just now which includes a double room plus a hot buffet and DJ for £399.99 and it seems crazy to pass it up. What should I do?

Whatever you choose for your wedding, just don’t show off because it could get you killed. A girl in my class, Katie Basset, has a rich dad who paid for the ultimate birthday party for her. There was a circus and an ice rink, and Duncan from Blue turned up to sing happy birthday to her. Problem was, Katie wanted to impress as many people as possible, so as well as all her rich pals, she also invited us plebs, who started a stampede when word went out that there were iPods in the party bags. Thankfully Katie only suffered minor spinal injuries and a broken nose. Perhaps next time she’ll stick to boxes of Smarties.

Police get go-ahead for lager cannons 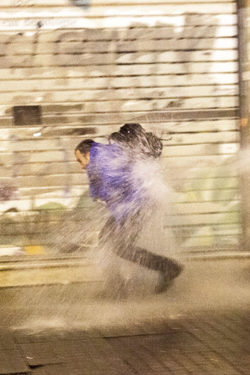 At first it hurts, then it feels nice

Think tanks believe the ban on budget alcohol could make the masses excessively clear-headed and difficult to manipulate.

Tory backbencher Julian Cook said: “The last thing we need is an underclass that is strong, healthy and in control of its bladder functions.

“It is my belief that for decades Super Strength White Ace lager, and the other one with the fist on the can, have been the only things been standing between us and revolution.

Take away their daily dose of happy piss that keeps them merry while conveniently killing them, and you’ve got an army on your hands.

They’ll be working out in the morning, agitating at public meetings in the afternoon and reading Marx in the original German in the evening. Eventually becoming ‘super strength’ in mind, body and spirit.”

Lager cannons direct a super-concentrated jet of Special Brew or Tungsten that penetrates the pores of miscreants, first knocking them to the ground then washing over them like waves of sweet oblivion.

A police spokesman said: “We tested it on an anti-cuts demo. It’s like magic, they just started fighting each other then after they’re all knackered you scoop them into ambulances.”