Should I get a swastika tattooed on my face?

I’m supposed to be the biggest badass in One Direction, but now everyone thinks Louis and Zayn are the bollocks just because they smoked what the newspapers are calling ‘a roll-up blunt cigarette joint’. I was thinking of having a swastika tattooed on my face just to remind everyone that I am far more hardcore than those other four middle-class pansies. What do you think?

When I grow up I’m going to be a rebel. I’ll do bad stuff like give the finger to lollipop ladies and do massive burps at the dinner table and leave supermarket trolleys in the wrong place. My dad does all these things and he’s really naughty. He even once called my granny a ‘satanic bitch’ behind her back. She didn’t hear him though so I helped him out by shouting it for him really loud so that everyone in the post office could hear. 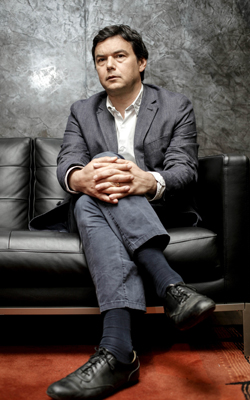 ECONOMIST Thomas Piketty’s Capital is on course to become the most unread book of the early 21st Century.

The book, which offers a devastating critique of capitalism, is well on its way to joining Naomi Klein’s No Logo and Stephen Hawking’s A Brief History Of Time as a shop-to-bookshelf classic.

Graduate Eleanor Shaw said: “Have you seen the size of this bastard? Plain cream cover, serious typeface, it looks fantastic on the shelf it will never leave.

Put it next to my Malcolm Gladwells, The God Delusion and that Steve Jobs biography and bang, Im a fucking polymath. Nobody needs to know about the Jilly Coopers under the bed.

The book, which claims that the structural inequality in capitalist societies will lead to their collapse, has been embraced by the left-wing and fiercely criticised by the right-wing after they just looked at the blurb on the back.

Joseph Turner, of the Adam Smith Institute, said: Its actually very difficult to comprehensively disprove Pikettys conclusions without knowing what they are, which would involve reading it.

I ended up picking some random numbers off a page near the middle and saying they were wrong.

Piketty said: The arguments in the first half of my book are absolutely watertight.

I assumed nobody would get past that so the last 340 pages are cut and pasted from Katie Prices Love, Lipstick and Lies.