Normally I pride myself on tact and diplomacy but a certain situation is wearing thin. My ex-girlfriend just can’t take a hint. Since our relationship ended I have dated a long line of beauties and even got engaged to a couple of them. Did she get the message? No. Now I seem to have got some poor lass in the family way and can you believe it, the ex is STILL sniffing about. How can I get Sinitta to sod off?

You need to be very careful with this one, because if you say the wrong thing, this person may well turn on the water works and tell the teacher, and then you’ll be hauled up for bullying. I once told Suzanna Potterton she wasn’t invited to my party because of her terrible flaky scalp (legitimately, I was worried it might contaminate my Peppa pig birthday cake), and next thing I know I am on the naughty table being made to write a poem expressing my deep shame and regret. Unfortunately, as I soon discovered, there is no rhyme for dandruff in Roget’s Thesaurus. 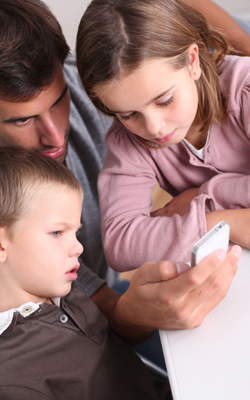 HUMANS experience the world as a sequence of vague backdrops surrounding their phone screen, it has emerged.

Researchers found that modern families sit in their living rooms staring at hand-held devices, only vaguely aware of each other’s presence as indistinct pinkish blobs.

Psychologist Emma Bradford said: “People still spend time together wherever there are nice soft chairs to sit on. But whether it’s at home, work or in the pub they’re fully immersed in dicking around on their phones.

“Teenagers have dubbed non-phone reality ‘the blur’, or ‘beyond the rectangle’.

“But to make everyone feel better about that, a group of phone-dickers is described as a ‘digital hub’. Which sounds sort of cool and worthwhile.”

The portable nature of technology means that most people do not even know where they are.

Momentarily diverted from Candy Crush Saga, 23-year-old Nikki Hollis said: “Is this outside, or am I in a massive building?

“I mostly just wander around, staring at my phone.

“Sometimes people bring me food that I’ve ordered via an app on my phone, it’s like a 3D arm emerges from the blur holding a pizza or some chips.”