Dear Holly,
Since the birth of my first child, I have developed a rather intimate and embarrassing problem, and I am too ashamed to visit the doctor. Before I fell pregnant I was vaguely aware that having a baby might have some physical side-effects, but it seems that squeezing out a head and shoulders has seriously knackered my flaps. I use to pride myself on my risqué collection of thongs and split-crotch panties. Nowadays you'll

usually find me hobbling around the feminine products in Morrisons with a large piss-sodden pad wedged under my clacker. All I want is for things to go back to the way they were before the birth. Can you help?
Geraldine
Newcastle

Dear Geraldine,
Once, in assembly, Mrs Gregory was telling us a parable from the Bible about the Prodigal Son. I think she was trying to tell us that you can be as naughty as you like and you'll never get in trouble with your mum and dad. Then suddenly all the kids at the front started screaming and jumping up and I could see on the floor was a big stream of yellow wee coming from Oliver French. We all got to go outside and have extra playtime instead of hearing more dubious advice from Mrs Gregory, and Oliver French was taken to the welfare office.

It sounds like you maybe have the same problem as Oliver French, so try to get over your embarrassment and go and see the doctor as soon as possible. Otherwise, you might end up wearing brown lost property pants and sitting alone on the naughty bench until your mummy comes to fetch you.
Hope that helps!
Holly 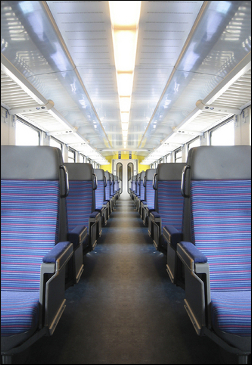 THE punctuality of Britain's rail system is directly related to the number of people out of work and not getting the train anymore, it has been confirmed.

Network Rail said the financial crisis had pushed efficiency to an all-time high as unoccupied carriages rattle past ghostly, tumbleweed-strewn platforms without having to stop.

A spokesman said: "More than 90% of trains are now running on time and all because we're no longer heaving thousands of fat, greedy men back and forth to London Bridge.

"We would have had a perfect record, but last week some old grandmother wanted to go to Frinton via Colchester and fucked everything up. We begged her to take the bus."

Efficiency was also boosted after a programme of track improvements that should have been done 50 years ago led to a slight reduction in the number of trains skidding to a halt upside-down in a ditch.

Asked whether cost savings would be passed on to passengers, the spokesman said: "Sure, right after we clean the toilets. Next?"

Bill McKay, director of the Association of Rail Franchise Operators, said: "We are hoping to remove passengers from the business plan by 2014. In the interim we will have to implement gradual increases in the cost of a season ticket right up to the point where it would actually make more sense to stop bothering us and just buy your own train."

Passenger spokesman Julian Cook said: "Most trains are doing what they're supposed to do. Well done. Now can you please stop charging me two bastarding quid for a can of Coke? And as for Richard Branson, I'd do time for that shitheel."