Dear Holly,
I have been married to my husband for over 6 years, and we have three children together. The trouble is that for a while now I've been having sexual feelings about other women and I'm not sure what this means. My husband and I still have a healthy sex life, but nowadays, while he's pumping away like a Kwik-Fit fitter, I'm busy mentally replacing his big red face with that of Amanda Holden's lady lips. Also, I can't help touching myself of a morning when Loose Women comes on and they start talking about intimate feminine issues in a lewd and boisterous manner. Have I turned all lesbian?
Helen
Derby

Dear Helen,
Everyone knows there are no such things as lesbians. My big sister told me. Perhaps you also still believe in Father Christmas? Well I can tell you for free – he doesn't exist either. Nor does the tooth fairy. Also, if you sniff a dandelion and then wee the bed the same night it is probably nothing more than a coincidence. I'm lucky that I have a big sister who can tell me these things: I suppose you must be a weirdo only child, or maybe your big sister is dead and not able to give you valuable advice. Anyway, I trust you're not too upset that I have revealed the brutal truth, and perhaps now you can move on with your life.
Hope that helps!
Holly

Is Formula One The New 'Odessa'? 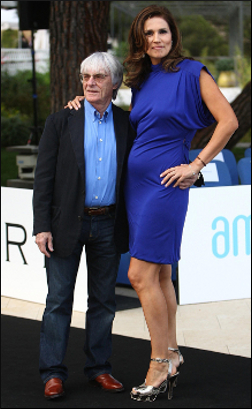 FORMULA One has taken on the role and responsibilities of 'Odessa', the support network for fugitive Nazis, it was claimed last night.

Officials at the Simon Wiesenthal Centre said their suspicions were raised when no Jewish drivers were included for the 59th year in a row, as well as  the fact that F1 boss Bernie Ecclestone seems to love Hitler.

A spokesman said: "The leading team is called 'Brawn'. This is clearly an Anglified version of 'Braun', or as it would be in Germany, 'Von Braun'.

"They have taken their V2 rocket-building skills and created what is obviously a violently anti-semitic racing car."

He added: "We now believe the 'Boys from Brazil' was a secret project to clone not only Hitler, but Nelson Piquet and Ayrton Senna. The result was Rubens Barrichello. It didn't work."

Ecclestone has been under pressure in recent months following his divorce from his massive, Aryan wife, while a group of F1 teams have threatened to set up a break- away series known as the 'Master Races'.

But friends of Ecclestone rejected the claims, insisting he admires all kinds of dictators, not just Hitler.

One friend added: "The thing you have to remember about Bernie is that he's very, very small."

International motorsport boss Max Mosley said he would consider the claims as soon as he had finished having his bare buttocks thrashed by a gang of whores who spoke German but were obviously not Nazis.