MICHAEL Owen has begun his Manchester United career by breaking his wrist in three places while attempting to sign his new contract.

According to the club, Owen passed the medical and then punched the air in delight, slightly spraining his shoulder.

A club spokesman said: "We hoped he would recover quickly after the medical and could at least take part in the first half of the contact signing, but the fountain pen was just too heavy.

"His agent was able to move his hand to form a legally binding signature but then, when Sir Alex congratulated him, he just fell to bits and had to be shovelled-up and carried out in a couple of wheelbarrows."

Owen, currently recuperating in the Louis Saha Memorial Injury Suite, will meet the rest of his team-mates over the next few weeks as they fall apart during pre-season training.

Former Man United player Stephen Malley, said: "The gaffer feels Michael can supply something different  as none of the lads have experience of wearing ankle casts on the continent. And he can also teach some of the younger strikers his agonised thigh-clutching technique."

Charlie Reeves, a United fan from Surrey, said: "I remember that goal he scored for England when he was 12. Marvellous. His cheeky little face made him look like one of the sprites from The Magic Flute.

"And now he is playing for my favourite team unless I start supporting Liverpool or Chelsea, or that one with all the nice Jewish people." 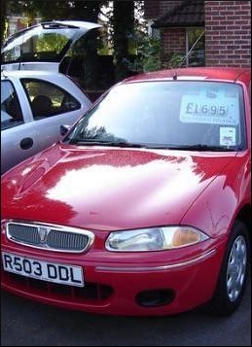 THE Serious Fraud Office is to launch an investigation after claims the Rover 200 may have been marketed as a car.

The SFO is understood to be examining documents from the failed company which show that executives tried to sell the object through a nationwide network of car showrooms.

Meanwhile initial inquiries suggest that when a new version of the object was released from the Rover factory the company would try to get car magazines to write about it as if it was really a car.

A source close to the investigation said: "To me the sickest and most calculating thing was all the television adverts they produced that showed it moving."

SFO insiders say this led to about 60 consumers buying the object after being tricked into believing it could get them to places they wanted to go and do it without making them look like some sort of arsehole.

The source added: "From the outside it may have looked vaguely like a car designed by a child, but open up the bonnet and all you would have found was a bin bag full of old clocks.

"The Rover 200 was, at best, a way for men in their sixties to piss twelve grand directly up the wall, while expressing some meaningless concept of patriotism."

Rover 200 owner Martin Bishop said: "Buying a Volkswagen or a Toyota would have been like digging up the corpses of my father and some of his friends, putting them in the back seat and then taking them for an enjoyable day out that did not involve phoning the AA and then being towed to the nearest garage."

He added: "And I don't like black people either."