Dear Holly,
I have a female colleague at work who is making my life a misery. She's really ambitious and competitive, and she tries to better everything I do, especially when the boss is around. I've been trying to ignore her endless one-upmanship for a while now, but it's getting close to the point where if she tells me her lunch looks more tasty than mine one more time I'm going to staple her eyelids to the desk, set fire to her hair, and forcibly insert a filing cabinet into her anus. Is there a last solution you can offer me before I resort to violence?
Sybil
Peterborough

Dear Sybil,
Take it from me, you need to whip this wannabe alpha-female into submission before she becomes a serious threat to you. I got embroiled in a drawing competition with my arch enemy Amanda Sullivan just before Christmas last year when she announced to the whole class that she was going to draw the nativity scene and that hers would be better than mine because I can't colour inside the lines (which is a complete lie). It was touch-and-go when she produced a Joseph reminicent of a young Bruce Springsteen, but it soon became clear I was the stronger contestant after I used my new silver and gold glitter pens to give the impression of moonlight dancing on the face of the baby Jesus. Already sensing defeat, Amanda Sullivan nearly soiled herself when, armed only with an HB pencil and a sheet of baking proof-paper, I superimposed Cheryl Cole's face on to the angel Gabriel.
So when your colleague challenges you next, instead of ignoring her you need to take the challenge on, and make sure you wipe the floor with that bitch – maybe you'll even get a gold star like me!
Hope that helps!
Holly 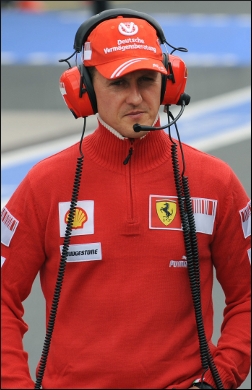 MICHAEL Schumacher's return to Formula One could re-establish the sport's reputation as a seemingly unending spectacle of utter dreariness, it was claimed last night.

The sport has changed dramatically since Schumacher's retirement in 2006 with the emergence of at least two other people who are able to point the car in the right direction most of the time.

The German, who won 91 races without doing anything remotely interesting, said: "I hope the car performs well and I can perform well for the team. It's a big challenge but I will do my best for the fans. How tedious was that?"

Schumacher said he had been dismayed by recent events in Formula 1, adding: "Max Mosely being thrashed by women dressed in my nation's garb of shame, a black man winning the title, Jensen Button not coming last – when will this vaguely interesting madness end?"

Despite his unparalleled success, Schumacher remains so boring that he has recently been forced to write 'you are Michael Schumacher' on his bathroom mirror in a bid to remind him who he is.

He insisted: "No more overtaking, no more surprises, no victorious underdogs. Just a procession of tax-avoiding millionaires following each other around the track in the precise order they set off."

The safety of F1 has been questioned following Schumacher’s return with many drivers concerned that being in a race with the German could be so boring they fall asleep at the wheel.

Britain's Lewis Hamilton said: "But then again, seeing lots of boredom-induced crashes would actually be quite interesting. That Bernie Ecclestone's a clever bastard."