Dear Holly,
My new boyfriend is really sweet and fun and attractive. The problem is that he’s got a tiny penis, and I can't help being slightly repulsed by its meagre dimensions. I've told him size doesn't matter, and that it's really not that small, but whenever we have sex I find myself secretly balking at the sight of his pathetic little cocktail sausage. Do you think I should finish the relationship?
Emma,
Bangor

Dear Emma,
The male member is a fascinating and sinister object. The first time I encountered one was in the garden when my granny's dog, Sergeant Bilko, was playing with my sister. They were bouncing about on the lawn, when suddenly he went all frisky and started trying to rub himself against my sister. I noticed that a little red lipstick had started to come out from between his legs. I didn't say anything though, I just watched it getting longer. My sister thought he was dancing with her and she was laughing and shouting at my granny and grandpa telling them to watch Bilko dance with her. Then I was laughing too, because Sergeant Bilko had done a white wee-wee on her back.
So if I were you, I'd avoid anyone with a penis, no matter how big or small, and if you get invited to dance make sure you've got plenty of tissues handy.
Hope that helps!
Holly 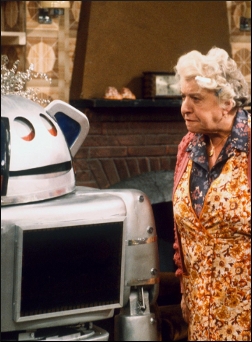 ROBOTS who dislike foreigners and other people's cats are being sold as companions for the elderly.

The Geriatron 9000 is equipped with a selection of far-right opinions and a detailed knowledge of cake.

Its range of built-in conversation topics include the prices. soup ingredients, how the new girl on Countdown isn't as good, and why on earth the people next door don't trim their hedge back.

The machine also comes with a number of mechanical complaints such as a leaking valve, rusting terminals and how that Pakistani doctor made its failing visual sensors even worse.

Inventor Tom Logan said: "Not only is the UK's population ageing dramatically, but most old people are so vile and obstreperous that no human should have to spend time in their company.

"The 9000 provides the perfect companion for your elderly relatives while simultaneously assuaging your guilt about leaving them to rot in some hell hole and only visiting them for ten minutes every fourth Easter."

Audrey Pendennis, an 83 year-old Geriatron owner from Surrey, said: "Normally I hate everything as a matter of principle.

"But I don't mind this shiny metal man too much. He's racist and doesn't foof. Having him has made my life a bit better, although on balance I'd still rather be dead."

The Geriatron 9000 retails for the precise amount of cash in the Family Circle biscuit tin under the bed and comes in a range of finishes including brass, woodchip and shortbread.