Abramovich Forced To Buy Other Types Of Human

CHELSEA owner Roman Abramovich may be forced to buy other types of human being following the club's 18 month transfer ban.

Since 2003, the Russian tycoon has invested millions on football players, believing them to be life-sized Franklin Mint collectibles.

He is understood to particularly annoyed as he was just a Franck Ribery away from completing his 'Over-Priced Frenchmen' set.

But sources close to Abramovich said he is now considering a zoo containing Oscar winners from the last 20 years or a 'living' wax museum of Nobel laureates.

A Stamford Bridge insider said: "Like any parent he wants his children to be able to spend their free time feeding tit-bits to Tom Hanks and Denzel Washington and giving their little friends a ride on Daniel Day Lewis."

The source added: "But of course his dream is to buy Nelson Mandela and then just prop him at the end of his bed so the first thing he sees every morning is the old man's genial, smiling face."

Chelsea were banned from signing new players until January 2011 after convincing a teenager from French side Lens to move to the club in exchange for an emerald the size of an ostrich's eye.

Manager Ian Ancelotti said: "I suppose we'll have to make do with our current squad of 30 prodigiously-talented multi-millionaires. But with injuries, we may have to resort to our international-standard reserves. I'm terribly worried."

Since the ban, Chelsea unveiled a new player Ancelotti claims to have discovered cleaning the lavatories while insisting his resemblance to Valencia striker David Villa was nothing more than a 'bizarre coincidence'.

Fat Girls Having Best Day Ever 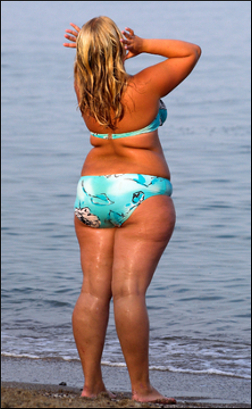 FAT girls are having the best day ever after a scientist said all the skinny girls were going to die first.

Emma Bradford, 18-stone of girlmeat from Doncaster, said: "You may have skinny little legs Nikki Hollis, but in 20 years time you'll be dead and I'll be the one bouncing up and down on your boyfriend until he bursts.

"I'll be thinking of you as my giant thighs almost smother his grinning face. Then I'll put on my massive pants and make him a big, sexy breakfast of sausages and pies."

Emma warned that acquiring a healthy set of thighs takes a lot of hard work and would not happen overnight, but advised would-be thigh perfectionists to start with a box-set of One Tree Hill and an enormous amount of Pringles.

The thigh boost comes just 24 hours after a magazine published a naked photograph of an attractive woman with at least two chins and a belly.

Dr Margaret Gerving, director of the Simply Be Foundation, said: "We have been saying for years that big girls offer much better value for money.

"They live longer, they have stronger personalities, they clean their plate and they can take several days to explore."

She added: "Now then, who's up for a chocolate sandwich?"