Dear Holly,
The other day, I was driving to Dixons
to pick up a new Super Woofer for my Nissan Almeira and I happened to
stop at a traffic lights next to a rather attractive lady in a red
mini. I immediately deduced she was probably a slut because she was
listening to The Saturdays at full volume, so I attempted to engage
her in some idle chit-chat on the off chance it would lead to some
roadside hanky panky. Unfortunately, as soon as I’d revved the engine
and sexily mouthed the words ‘how about it?’, she threw back her head
and laughed like an evil banshee, and then accelerated off into the
distance. Do you think Iâ€™ve lost my mojo, or
was that woman just playing hard to get?
Graham,
Dulwich

Dear Graham,
If you really want to be friends with
girls, you’d better get used to the idea that they don’t really care
about fast cars or powerful speakers, or even how many worms you’ve
collected in a jar. If you want to retrieve your mojo, may I suggest
you learn a few skipping rhymes, or how to play hopscotch, or even
how to make rose-petal and grass perfume. Also, don’t mock the fact
that we like to brush the hair of sinister plastic babies, and
pretend to eat invisible cakes and drink invisible tea served from a
plastic dinner service. And don’t forget that what we hate most of
all is little boys showing off like idiots and trying to impress us
with their ridiculous toys. You need to get it into your head that
until you lose the macho attitude, you won’t be invited to play in
the Wendy House.
Hope that helps!
Holly 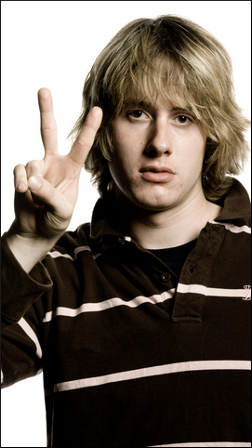 THE nation’s cool teenagers are celebrating their worst GCSE results ever after being too hip to make the slightest effort.

Cool teenagers, classified as those who are popular, good-looking and in a band, scored a record average low of four Ds, two Es and an N, which means they didn’t turn up to an exam because they were off their tits in a squat with some 20-year olds.

Educationalist, Emma Bradford, said: “The UK’s dangerously beautiful young hipsters have scored their poorest ever grades, successfully proving that they don’t give a shit what the establishment thinks of them.

“They are doubtless pleased, in a nonchalant sort of way, that they have thwarted any attempts by the government to make the exams easier to pass.

“So they will be partying all this week in converted lofts with a mixture of Skins extras and minor indie celebrities, meeting people who know Alexa Chung and possibly experimenting with heroin for the first time. The little shits.”

Tom Logan, 17, who prefers to be known simply as ‘T’, scored 5 Fs and a K. He is now hoping to do a lot of gigs with his electro-grunge band The Crack Eskimoes and have sex with a massive amount of girls.

He said: “I wouldn’t say I’m pleased or sad about the results. It’s simply not relevant to me or my art, not that you’d understand.

“Maybe in five years’ time I’ll be working on the pork counter in Morrisons while all the nerds are earning 100K in the City, but I won’t even care because I’ll have my memories of debauched sex and drug experiences which they would gladly sell their souls for.”

Tom’s classmate, Joseph Turner, who got 10 A*s, said “I feel like the hard work’s really paid off. My parents are really pleased and have already bought me a book about the Oxbridge entry process.

“So, what’s this ‘vagina’ I’ve been hearing so much about?”