I'm sorry to hear you feel so sad just now. Lots of us experience a similar feeling at some point, but you need to remind yourself it's only a temporary thing. Last year I wanted to stay off school because Shaun Wilson farted on my head in front of everyone when I was putting my shoes back on after PE. The next day I told my mummy that I was too sick too go to school, but she didn't believe me because I didn't have a temperature. I had to use her purple eye-shadow to fabricate a convincing rash on my tummy before she would take me seriously. For some reason, the rash made mummy start to shake and cry and we had to go to the hospital. The good news is that I got the rest of the day off school and the doctor gave me a lollipop for being so brave. You're lucky because your mummy is probably dead and you don't have to concoct elaborate ruses to convince her you need to stay in bed. So my advice is to stop moaning and count your blessings – and be thankful you don't have to sit next to Shaun Wilson for the rest of the summer term. 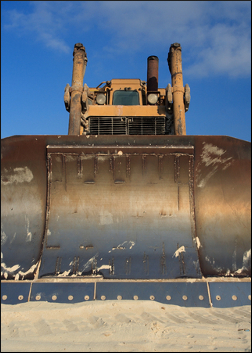 As workmen flattened the home of the young Slumdog Millionaire actor Azharuddin Mohammed Ismail, film fans were already working out how many bulldozers would be needed to destroy Bale's Los Angeles mansion.

Tom Logan, from Finsbury Park, said: "Slumdog Millionaire wasn't that great but I wouldn't necessarily thrash someone with a bamboo cane and then bulldoze their house because of it.

"Now Christian Bale on the other hand is a miserable, charmless prick who could certainly do with having 25 tonnes of heavy machinery crashing violently into his open plan kitchen-dining room.

"I'd imagine that would make him shout and swear quite a lot; but of course the Mumbai Council workers will all be wearing their standard issue ear protectors in accordance with health and safety regulations thereby rendering impotent his pathetic and embarrassing rage."

Logan added: "I can just imagine him screaming 'what the fuck are you fucking doing to my fucking house you fucking assholes' in that weird mid-Atlantic accent of his while the demolition crew give him a big smile and a friendly wave before taking a dirty great sledgehammer to his downstairs bog."

Logan has emailed a bulldozing list to the mayor of Mumbai, including Daniel Day Lewis, Adam Sandler, Richard Curtis and 'every last fucker who was in any way involved in Indiana Jones and the Kingdom of the Crystal Skull'.

Meanwhile Slumdog director Danny Boyle has again denied that Ismail had been exploited but admitted he probably should have paid him just enough to buy a new stinking hovel.