THE audience from BBC1’s Question Time was marching on London last night, parading the severed head of housing minister Margaret Beckett on a pike, like some kind of ghoulish mascot.

Amid growing signs that things might be about to kick off, the audience spilled out of the Grimsby Institute at 11.20pm and immediately headed for Market Rasen via the A46.

They then carried on for about 15 miles before taking the Lincoln bypass and finally joining up with the A1 just south of Newark.

Earlier they had stormed the stage, grabbing presenter David Dimbleby and locking him in the ladies’ toilet before beheading Mrs Beckett and firing senior Tory MP Teresa May through a stained glass window using a makeshift catapult.

Their fellow panellist, the former Lib Dem leader Sir Menzies Campbell, has been stripped naked and is being transported to London in a tiny cage made from bamboo.

As of 8am this morning the Question Time audience had stopped at a service station near Biggleswade for refreshments, a toilet break and a chance to wipe some of the gunk from Mrs Beckett’s head.

The audience is being led by Grimsby loud-mouth Roy Hobbs, mainly because it’s his pike.

Mr Hobbs said: “I went to the trouble of bringing a pike to Question Time so I think it’s only fair. And obviously when we get to London they are going to want to talk to whoever’s carrying the severed head.” 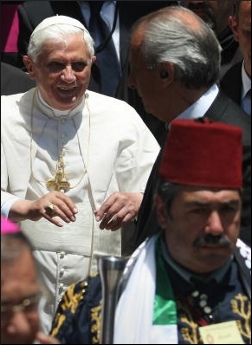 POPE Benedict rounded off his historic visit to the Holy Land yesterday by seizing an opportunity to stick it to the Christ-murderers.

Backing calls for a Palestinian state, the Pontiff said the Jews 'shouldn't even be here in the first place', claiming a previous German government had come up with a 'perfectly sensible plan to send them all to Madagascar'.

Mr Pope told Palestinian leaders in Jerusalem: "The Christian presence here diminishes yearly, despite us having the biggest god with the best super-powers. But this West Bank stuff is a lot of horseshit, if you'll pardon my Latin.

"It is iniquitous that people should be forced, in their own homeland, into heavily-guarded ghettos and denied their basic human…ah, right, fair enough, ignore that bit."

He added: "Anyway, the point I'm making is they deny the Christ. Then again, so do you, but at least you have no truck with poovery."

The Pontiff said Judaism had benefited too long from friendly media coverage, insisting: "They got fantastic press for the Marx Brothers, Irving Berlin and Schindler's List and what do we get? Dan Brown, the St Winifred's School Choir and Nuns On The Run.

"They kill Jesus and then invent both communism and Lesley Joseph and everyone loves them. We ignore the odd holocaust, molest the odd child and all of a sudden we're the bad guys. I'm fucking sick of it."