As the Irish-based carrier unveiled plans to penalise customers £40 for choosing to fly with them, mental health experts said it was now vital that friends of the company stage an immediate intervention.

In a statement released yesterday Ryanair chief executive Michael O'Leary said: "Cock-a-doodle-do! Everyone pay attention. These are my new rules.

"You will print out your own boarding pass and pay me for the privilege of doing so. If you do not have a printer you will pay me £40 for not having one and you will then wear a paper hat that I will make for you. The hat will cost £40.

"You will complete a quest. Probably involving a rare gemstone. You will bring me the gemstone wrapped inside a cheque for £40.

"Luggage is a sin and you will be punished for it. Therefore your holiday will last no longer than 14 minutes. If it does I will kidnap your goldfish and charge you £40 a leg to get it back."

A spokesman for the British Psychiatric Institute said: "Ryanair is no longer something to be hated, it is something to be pitied. It's as if Mr O'Leary has suffered some kind of severe mental trauma. Perhaps he has finally flown on one of his own planes.

"He needs to be sedated, isolated and subjected to a twice-daily programme of powerful electric shocks. If that doesn't work we will have to carve out a hefty chunk of his frontal lobe.

"In the meantime we would urge other airlines to step in and start flying to Ryanair's destinations as soon as possible. For the love of God, please." 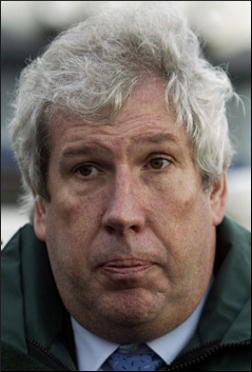 LABOUR MP Elliot Morley was last night confirmed as the first person in the history of the world to forget he had paid off his mortgage.

The former minister admitted he had completely forgotten to stop claiming taxpayers' money for the mortgage he had paid off before forgetting which of his two houses he actually lived in most of the time.

Mortgage slaves across Britain were stunned at the sheer scale of Mr Morley's forgetfulness.

Martin Bishop, from Darlington, said: "Complete strangers will remember where they were and what they were doing when I pay off my mortgage. I fully intend for it to be this generation's Kennedy assassination."

Tom Logan, from Hatfield, said: "I'm going to get Earth Wind and Fire to play Boogie Wonderland so loud it explodes every window within a 12-mile radius while the Red Arrows do a flypast over my house. I will probably have to take out another mortgage but it'll be worth every penny."

And Emma Bradford, from Peterborough, added: "Remember when they attached millions of gigantic fireworks to the Eiffel Tower? I'll make that look like a fucking birthday cake."

Forgetfulness expert Dr Margaret Gerving said: "As a former agriculture minister he may have spent a bit too much time with farmers. They're always forgetting how rich they are and then claiming thousands of pounds from people much worse off than them."

Mr Morley will today attend a brief ceremony at the London office of the Guinness Book of World Records after which he is expected to hand himself in to the police.