WHAT would you do if your parents knew exactly what your willy or vagina looked like? Sadly, this is a scenario all too familiar to my boyfriend Donny: he's suffered a terrifying campaign by his psycho ex-girlfriend, who has taken it upon herself to email harshly lit pictures of his penis and accoutrements to everyone he knows. It's for this reason alone that I welcome the introduction of ID cards, which with any luck will allow us to track down and put a stop to such deranged, fat-ankled bitches.

This all kicked-off because the ex, Laura, only just learned that Donny and I got together before they had officially broken up. Hey, I'm not proud to be a home-wrecker but if Laura wanted to keep her man interested, she should have put more time into attending step class and less time into being a dullard marketing consultant. Perhaps if she'd had the stamina to gain an honours degree like the one I've got, she could have had a proper job and Donny would have respected and feared her as he does me.

But now everyone we know is privy to Donny's most intimate section. I've tried to console him the best I can, pointing out that while the photo is far from professionally shot, his penis actually looks clean and his balls are really quite large and not at all dangly like they can sometimes appear.

The bonus in all of this is that Laura lives in Manchester, so it's only a matter of time until she gets her ID card. And if she tries to skip town to avoid it, I won't rest until she is deported back again. I intend to make sure the authorities know about her acts of terrorism so they can brand her, for all eternity, as 'single and unhinged'. Let's see her try to get past customs on an 18-30 holiday with that hanging over her!

In the meantime, I took it upon myself to nudge the Manchester police in the right direction by some carefully worded announcements on Twitter such as, 'Laura has unnaturally long inner labia'. This way everyone will realise that she’s a total freak who probably drove Donny away with her big beef curtains flapping around in the breeze.

Donny has refrained from posting pictures of these monstrosities on Facebook which I think is a privilege she does not deserve,  considering even his own mother can no longer look him in  the face. Still, at least I can rest easy knowing that Jacqui Smith is on our side and it won't be long before Laura is tagged, chipped, subjected to a few rounds of police brutality and locked in a small, dank, windowless room as punishment for her hate crimes. 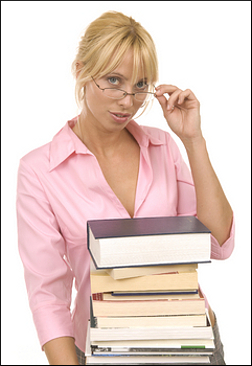 QUIET, bespectacled female librarians really do go like a bloody train, it was confirmed last night. According to researchers at the Institute for Studies, the tweed skirts and sensible glasses of intelligent, bookish women are nothing more than a flimsy facade concealing a smouldering volcano of hot, undiluted filth.

Professor Henry Brubaker said: “We have finally confirmed that women who look as if butter wouldn’t melt in their mouths could actually suck a tangerine through a keyhole.

“While a simple-minded shop girl is perfectly suited for a perfunctory knee-trembler behind some bins, if it’s eye-boggling three-way genital branding you’re after, get yourself along to a poetry recital.”

But Brubaker’s research has come under fire from his peers, who claim it was nothing more than a ruse allowing him to say dirty things to clever women.

Professor Julian Cook, of the Studying Institute, said: “He claims to be researching the link between intelligence and intimacy but the next thing we know he’s trooping female historians into his office and asking them if they’ve ever used a ball gag.”

Tom Logan, a sexual intercourse enthusiast from Finsbury Park, said: “Are you telling me that just because Anne Widdecombe’s got a degree in Latin that somehow makes her better at sex than Kelly Brook? I’m sorry, but I don’t believe that for a second.”

Brubaker defended his research methods, insisting: “It is perfectly valid to ask women what sort of freaky shit they got up to at Cambridge and whether or not they think I’m good looking.”

Astro-physicist Dr Nikki Hollis said: “I was slightly concerned when he asked me how long I could keep my ankles behind my ears. A quiet, bespectacled women like me is not used to hearing that kind of thing.

“And it’s 45 minutes, in case you were wondering.”