THE war of political apologies escalated last night as prime minister Gordon Brown pledged all his clothes to a charity shop and began wandering about in the buff.

In his latest pathetic attempt to regain the initiative, Mr Brown said if politicians were to rebuild trust he must remove his underpants and become the living embodiment of their shame.

The bidding started yesterday afternoon when dozens of absolutely minted Tory MPs agreed to pay back the piddling small change they had spent on animal turds and moat polish.

Mr Brown then insisted that Labour would match the Tories pound for pound, let poor people use their pools seven days a week and lay on a free bar, including big bags of Kettle Chips.

Within minutes of Mr Brown's announcement Mr Cameron upped the ante by stripping to the waist and scrawling the words 'I AM A GREEDY SHIT' on his chest before inviting a Macmillan nurse to hit him across the face with a cricket bat.

A day of high drama at Westminster ended shortly before 11pm last night as the prime minister held an impromptu press conference during which he removed all his clothes and stood silent and motionless with his hands on his hips as a single tear ran down one of the cheeks on his face.

Mr Cameron is now expected to tell his shadow cabinet to strip naked, get down on all fours and let unemployed people ride them around Trafalgar Square while thrashing their milky-white buttocks with a rolled-up copy of the Daily Telegraph.

Meanwhile, in a desperate bid to keep the story alive, the Telegraph is to reveal the supermarket receipts of random members of the public, starting tomorrow with you.

A spokesman said: "That's an awful lot of cucumbers for just one person, is it not?" 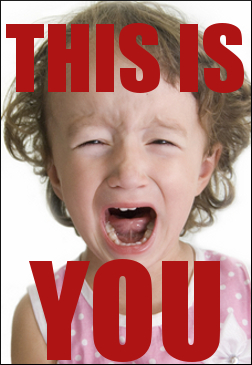 AS a study showed that 40% men are suffering from recession-based mental illness, a leading psychiatrist has advised them to stop whining like a bunch of three year-old girls.

Dr Roy Hobbs, a former pipe fitter, has published a new book entitled Man Up: It's a Recession, Not Ball Cancer, which teaches the value of 're-conceptualising feelings of inadequacy by drinking a case of Stella and shouting your way through Rocky IV'.

Dr Hobbs added: "My practice has dipped by 50% since the recession, but I didn't cry like a grandmother, I dealt with it by eating a steak the size of my head and starting a pub fight.

"A lot of my patients are former financiers who feel emasculated after catching their cocks in the revolving door of the London Stock Exchange.

"Through cognitive therapy sessions conducted at Wimbledon dog track, I counsel them that the Tuscan farmhouse they have now been forced to sell made them look like a total bender anyway."

Wayne Hayes, an ex-broker at Donnelly-McPartlin, said: "I was really low after downsizing my Chelsea Harbour apartment to a bedsit in Loughton. But when Dr Hobbs showed me footage of some limbless orphans in Bangalore before nutting me squarely on the bridge of the nose, I soon realised that I had been acting like some kind of gay bitch."

But Dr Hobbs defended his methodology, adding: "My mate Alan's got a lock-up in Bermondsey, so if they want to have a chat about psychotherapeutic orthodoxies, just name the day and the time and I'll be there with two successful case studies and three foot of bike chain."