THE pretend marriage of Jordan, the pretend novelist, and Peter André, the pretend human, was last night on the completely made-up rocks.

Friends of the couple's management company say Jordan, the fictional name of Katie Price, is pretending to be devastated after André invented one of his made-up words without consulting her.

"Peter said it was a combination of 'exhausted' and 'knackered', but Katie was clearly pretending to be furious with him.

"Within seconds the management company had got involved, pointing out that this would be the perfect pretext for an acrimonious pretend break-up resulting in lots of very real money from the idiot readers of OK! magazine."

The spokesman added: "After having the word 'pretext' explained to them, they both agreed that it was probably a really good idea."

According to friends of the spokesman, Price has fled the country using her Jordan passport and will pretend to be heartbroken until her next pretend novel comes out.

A friend said: "It's such a shame that their obviously fictional love affair has ended in such a transparently false way. But it will all be great material for whoever it is that's been writing all her books." 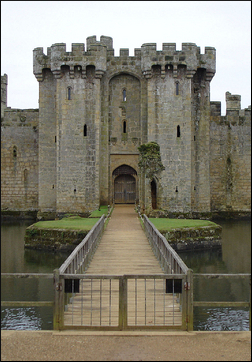 THE Tories last night proved they have still got it after it was revealed that a senior MP claimed more than £2000 for drawbridge wax and moat freshener.

According to the Daily Telegraph, Douglas Hogg, MP for West Hoggshire, used public money to maintain an authentically medieval lifestyle, including £150 a month to have his jousting kit dry-cleaned and £820 for a state-of-the-art German lance sharpener.

Mr Hogg, whose dad was called Quentin, said: "A drawbridge will start to squeak unless it is treated once a fortnight with three gallons of top quality Hungarian beeswax.

"If I am unable to raise my drawbridge then I face the very real possibility of working class people coming into my castle and striking up awkward, stilted conversations while furtively stuffing the pockets of their smelly duffel coats with great handfuls of the pheasant paté that they have so very kindly paid for."

The latest revelations show a stark contrast between the two main parties with Labour MPs claiming for nice things from John Lewis that their parents could never afford, while the Tories are focused on maintaining large volumes of water in their back gardens.

According to House of Commons records, 14 senior Tories claimed more than £20m for moats, lakes, pools and pool-related paraphernalia, including a retractable helipad and one of those inflatable chairs with the cup holder.

Meanwhile one Tory backbencher claimed more than £300 for eight tons of horse manure which he then tipped into his publicly funded swimming pool because he was 'a bit bored'.

But taxpayers were last night applauding the Tory extravagance for its aristocratic self-confidence and grandiose ambition.

Julian Cook, from Hatfield, said: "I'm relieved to see that after all these years the Tories can still put on a show. It is nothing less than a masterclass in taking the absolute piss.

"You've got these petty, lower-middle class Labour MPs watching their wide-screen television sets and putting plastic covers on their three-piece suites, but it takes the solid brass nuts of an old Tory to claim for moat-widening."

He added: "If we are going to be governed by utter scum, it should at least be scum with a bit of style."