HISTORY is full of momentous side and underboob flashes – from Tamar seducing Judah in a roomy sarong right up to Lil’ Kim coming out of the toilet in a pair of braces.

The Druids’ stubborn refusal to write anything down means that there is no contemporary record of my epic side boob. But it was instrumental in how I inspired the people to follow me unquestioningly.

Sideboob looks easy, but is in fact a delicate operation requiring advanced understanding of the laws of physics. This is especially true for ladies with more than a handful, who will tend towards the more unpredictable ‘shoogly side boob’.

When I rode my horse through Anglesey at the start of my campaign, the hordes were on tenterhooks waiting for the bouncing motion to flop one right out of my billowing robes. But of course it didn’t. This is because I’d craftily stuck my nipples onto the inside of the fabric with peat and spit, a technique later reinvented by Anne Hathaway at the 2006 Oscars. The confidence of a woman who marches without fear is what unites the masses behind her. Thus, Anne got an Academy award and all Welshmen will follow her into certain death.

Another technique used to great success in warfare is to write baffling Latin phrases up and down your sideboob. Nothing puts a Roman off his stroke more than some utter gibberish in his native tongue. I got inked with the phrase ‘Repulsive cat ranger, rickets?’ which made many a pillager furrow his brow just long enough for me to cleave his head in two with an axe.

The mighty warrior Hayden Panetierre is the greatest living advocate of this technique and, with her side boob etched with a load of old bollocks in Italian, continues to make Romans go boss-eyed well into the 21st century. 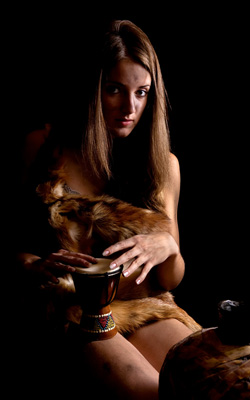 A WOMAN from Cheltenham has been condemned for her ongoing silence about Boko Haram on social media.

Architect Eleanor Shaw was described as a ‘vile apologist for terrorism’ after making no mention of the Islamist militant group on the internet.

Web user Stephen Malley said: Ms Shaw could have heroically raised awareness of the situation in Nigeria among her 236 Facebook friends by posting a link to a Huffington Post story with some sad emojis.

But her only recent activity has been to change her profile picture to a lemon wearing sunglasses, and tweet complaints about engineering works to First Great Western.

Joseph Turner, a former friend of Ms Shaw, said: How can we ever hope to defeat extremism if Boko Haram isnt a trending topic?

Expert analysis of Shaws social media platforms has revealed a shocking indifference to the suffering of others.

The coldhearted 32-year old posted nothing about Malaysia Airlines Flight 370, thus hampering the search for the missing plane, and has refused to express an opinion about Ukraine even after George Clooney got involved.

She should reflect that for evil to triumph, all that needs to happen is for good people to not use hashtags.