Your Astrological Week Ahead With…

Scorpio (24 OCT-21 NOV)
Fate will bring you something that you didn't expect. That's what he does. What did you expect? A song and a fucking tap dance?

Sagittarius (22 NOV-21 DEC)
If you've recently experienced problems in your relationship zone that will be because Mercury was going backwards. And nothing whatsoever to do with your continual drunken infidelity.

Capricorn (22 DEC-19 JAN)
The end of your first week at your new work will be marred slightly after your colleagues inform you it's "Dress-Nazi Friday".

Aquarius (20 JAN-19 FEB)
Suffering from a mild case of writer’s block in your isolated lakeside log cabin? Why not develop a murderous alter ego and then kill your ex-wife and her lover and bury them in the garden. That should free up the old prose style a little.

Aries (21 MAR-19 APR)
Remember that teacher that inspired you and made you believe you could achieve anything? Yep. Six years and a lifetime on the register.

Taurus (April 20-May 20)
The ongoing clash of Saturn and Uranus continues to create major problems for your work and career. Why can't they just sort themselves out and leave you out of it? Arseholes.

Gemini (21 MAY-20 JUN)
Don't give up, there's a new sense of purpose just around the corner. Although it might be the corner after that. If not, give up then.

Cancer (21 JUN-22 JUL)
With the number of voices currently in your head, surely one of them must be talking some sense? How about the one that keeps suggesting stuff to do with the garden shears? 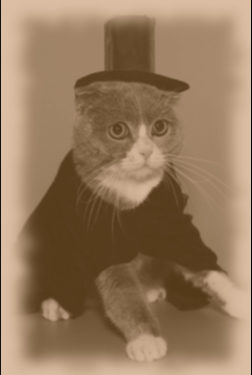 SIGHTINGS of small carnivorous cats, often with tabby or ginger fur, are on the increase, it was claimed last night. Recent evidence includes a blurry photograph of a black-and-white coloured male cat, or ‘tom’, taken in a house, and a masticated vole carcass discovered near Swindon.

Cat experts believe that the creatures escaped from travelling sideshows in the early 1900s and have since formed breeding colonies.

Small cat expert Julian Cook, said: “Travellers would come through rural areas with makeshift circuses. They would have small big tops in which cats wearing waistcoats and trilbies would perform Vaudeville dance numbers with the help of wires attached to their paws.

“However the Queen passed a law known as the Cats Act, which made it illegal for anyone to own a cat without signing onerous forms. The travellers were unable to read or write and thus released their cats into the wild.”

Cat sightings continue to rise around the UK and attract passionate interest among the sort of people who arrive very early at car boot sales and subscribe to Combat magazine.

Tom Logan, a 33-year-old Brighton plumber, claims to have seen a white cat with a bit of black on it on his window sill.

“It was about the size of a small labrador puppy. It stared at me for about three minutes, bold as brass, before jumping silently off of the window ledge.

“The animal then did a little piss on my lawn before retreating towards a neighbouring house, where it disappeared through a small square hole with a sort of plastic flap that had been cut in their door.

“Naturally I rushed over to warn them. But they were out, so I left a note.”

He added: “Everyone says I’m mental, but I know what I saw.”