How to have a really pretentious dinner party

DINNER parties are a great way to prove you’re better than your friends. But how do you pull it off?

Conspire a ruse to have an eccentric neighbour ‘pop-in’. Reveal afterwards that he is an eminent professor, which is true even though you also suspect he is a massive pervert.

Research some bollocks on the internet about history, modern culture or politics then steer the conversation towards your show-off monologue and pray to god no-one else knows about the Columbian Donkey Mezcal Festival.

Be a super-pretentious twat by following each course with a reading. A poem, song lyrics and finally a passage from an old diary when at age 14 you wrote down the deepest thought you will ever have in your life shortly after your stick insect died.

Constantly paw and fondle your partner to make it seem like you have the perfect relationship. Do this most of the night even though an hour before everyone arrived you had a relationship-ending row about overcooking the cuttlefish croquettas.

Serve an unforgettable dessert that requires you pipette hot chocolate sauce on a chocolate sphere whilst shoving mint up your nose and squeezing plum juice into your eye. 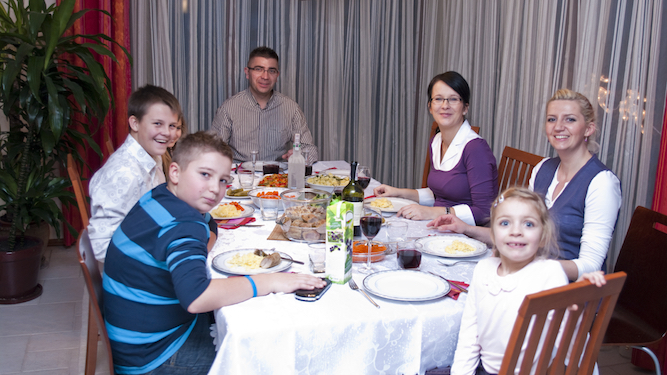 A FAMILY who decided to dine together at the table for a change now have to crane their necks to watch Emmerdale.

The Cooks, who usually enjoy their evening meal on the sofa, agreed that they should make the effort to have a proper dinner together like it says you should in the Sunday supplements.

However, they have discovered that the new arrangement makes it difficult for most of them to properly see the television and, for the unlucky person at the head of the table, impossible.

Julian Cook said: “It’s important to spend proper time together as a family every day instead of slouching in front of a screen like common scum. In theory, that is.

“But the chairs aren’t comfortable, we’re all stuck staring at each other’s munching faces and it turns out none of us particularly wants to hear about anyone else’s day, so we left the telly on.

“The reflection on the screen’s a problem, it’s not easy to change the channel and the angle made Richard Osman look even more freakish than usual, but I’m determined to carry on. Maybe get the old telly out of the attic.”

Wife Sarah Cook said: “I can see this lasting two weeks, max. Julian wants us to ‘talk more’, but if it wasn’t for The One Show we’d have nothing to talk about.”