I started buying clothes from the internet some time around 2005.

Despite quickly concluding that going to a shop, trying things and then buying them is less likely to result in me looking like a lunatic, I am still pissing money up the wall 13 years later.

I know that everything I buy online will be in some way unsuitable, weird or flawed. They will make me look like an escaped mental patient or a hippo in a boob tube.

Do they just get all the clothes that went wrong in the factory and send them to online shoppers because they know they’ll try them on, realise they look dreadful and then leave them on a chair for six months until it’s too late to get a refund?

If I hadn’t persisted in buying insane clothes I could have probably bought something genuinely useful like a car by now.

I wonder if my local Ford dealer would do a part exchange on 19 Aztec print playsuits? 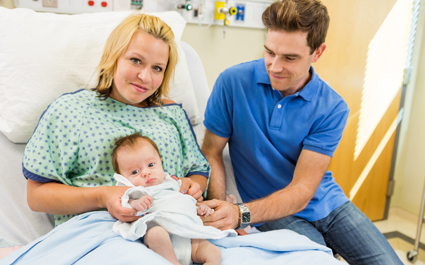 A COMMON couple are celebrating the birth of their third child.

Tom Logan and Emma Bradford, who are not even listed in Debrett’s, welcomed new arrival Ian Logan over the weekend at a common person hospital near Bristol.

Logan said: “We’d like to thank everyone who has helped us thus far, especially my sister who has agreed to walk the dog this morning while we are getting our stuff together.

“I don’t really know what else to say. The staff here are very nice but I’d avoid the ham sandwiches unless you’re desperate.”

The Logan family traces its lineage back to the 1950s, when historical records show that Logan’s great uncle Tony got banned from all the pubs in Yeovil because of some trouble that he always maintained was nothing to do with him.

Emma Bradford’s parents met when they both started their careers in a local engineering firm, working their way up to a semi-detached house in a cul-de-sac and a caravan in Tenby.

Norman Steele, a devoted fan of normal people, said: “I spent the entire weekend standing outside the hospital waving a flag, until a security guard came out and asked me what the fuck I was doing.”