Morrissey: I have become your dad

SLIM. Fey. Sensitive. An outsider. A poet singing of the disaffection of unemployment-hit youth. Ah, that’s how Morrissey used to be. Now I’m your bigoted old dad.

The signs were always there, let’s face it. Obsessive letters to the NME or the Banbury Guardian aren’t so different. And I was always a bit keen on being English.

You want to look at my Facebook account now. It’s wall-to-wall hate speech. Me and all the other expats, we know what’s going on. Britain isn’t Britain anymore.

I was always uniquely, painfully attuned to the suffering in the world. I felt it more keenly than anyone. I’m delighted to know it’s all foreigners’ fault.

Now you can’t even chat to me without queasily skirting the pits of my prejudices. Anything sets me off. Holly Willoughby triggered a rant about grooming gangs yesterday.

Oh, and talking of Willoughby; I like birds now. Yeah, the old Islamophobia’s not the only turnabout. I’m well into me tarts.

Her off the front of Saturday’s Star? I’ve had her. That Lucy Pinder? It wasn’t just a meeting of minds.

And I eat meat of course. You don’t get a chest like this on bloody vegetables, lad! Every Tuesday I’m down Wetherspoon’s Steak Club. He’s got the right views on Brexit.

There we are, son. Now at last will you shut up about me reforming the bloody Smiths. 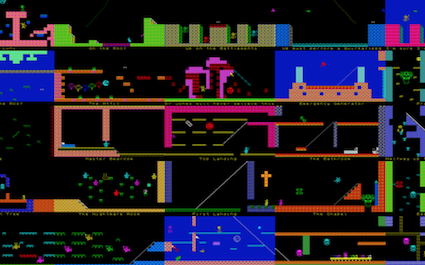 A 47-YEAR-OLD man can still tell you exactly how the whole of Jet Set Willy’s mansion was laid out, including short-cuts.

Nathan Muir has amazed friends and fellow drinkers by asking them to name any room on the ZX Spectrum 48k classic and instantly telling them how to get there.

He said: “The Yacht? Down to the kitchens, out the back door, past the tool shed, across the beach, boom. Watch out for that one arrow.

“Watch Tower? Get to the roof, climb the rope on We Must Perform A Quirkafleeg. Go up from there, you’re at The Off Licence. From the highest point to the furthest east, one jump.

“It’s all still there, rotating around in my head, every room, every item, every inch of that marvellous multi-coloured blocky mansion. Even when I’ve forgotten my own name I reckon I’ll still know how to get that tricky item in The Orangery.

“Never completed it, obviously. I was just a boy.”

Muir was then immediately one-upped by friend Tom Logan, who claimed to remember the game’s entire colour codewheel.