NIGEL Farage recently treated an audience in Sydney to his gags about the royals. Here the Brexit Party leader explains how to have a successful stand-up career on the side.

Learn to craft brilliant jokes
The best jokes reveal a truth about the world, but in a witty and surprising way. Try things like: “Meghan – what a bleeding cow!”, or “I hope Prince Charles dies soon, the git.” It’s funny – but with a point.

Practise your comic timing
Once you’ve said your feedline, for example, “Why did the chicken cross the road?”, let the anticipation build for a moment or two. You’ll get a much bigger laugh when you unleash your killer punchline: “To take charge of its own destiny free from protectionist EU trade policy.”

Know your audience
It’s easy for Stewart Lee to pander to his politically correct, university-educated audience, but could he write gags for jingoistic racists? No. And that is why he’ll never write classic one-liners like: “My girlfriend asked if I wanted to try something different in bed. I was like ‘Yeah!’, but she just said: ‘F*ck off home then while I shag this Polish guy.’”

Don’t lose it with hecklers
Effing and blinding at hecklers turns the audience against you, so keep your put-downs FUNNY. Personally I don’t have a problem with hecklers at my gigs, although that may be due to the audience resembling a mob getting warmed up for Kristallnacht.

Keep it fresh
There’s nothing more tragic than tired jokes about Pokemon or women taking ages to get ready. That’s why I’m constantly updating my act with fresh material like: “The Queen Mum – she liked her gin, eh? Have you ever noticed how old people smell of wee?”

Remember the real money’s in TV
Live performance is great, but if you want to break into the big time you’ve got to be on TV. Luckily I’ve just been been commissioned to do another series of my own show, BBC Question Time.

How to survive a networking event 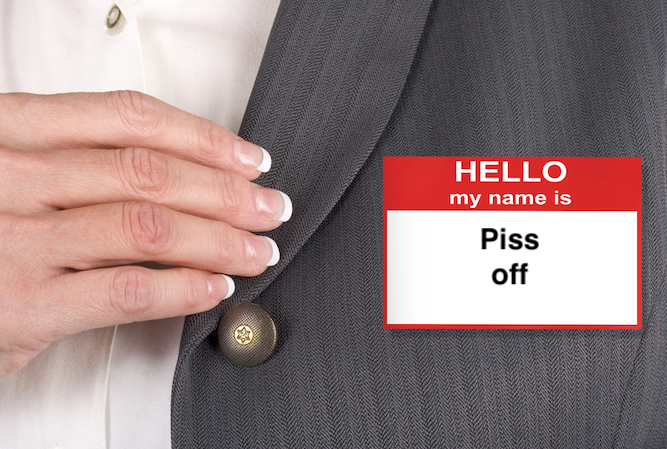 HAVE you been forced to attend some f**king ‘networking event’ by your boss and want to top yourself within two minutes of arriving? Here’s how to cope.

Find the bar immediately
A couple of drinks will soon take the edge off and you’ll be giving out business cards like they’re sweeties, followed by dancing on the table. If there isn’t a bar, try drinking 19 cups of coffee: the caffeine overload will either remove your inhibitions or cause such havoc in your bowels that you can cry off sick.

Remember that everyone else feels like a twat as well
Unless someone is an insufferable, overly motivated bellend, they’ll feel deeply awkward about attending a networking event and will only be there because their boss forced them to. You’re all in the same hideous boat together.

Look for another loner
Look for someone who’s standing by themselves and strike up a conversation. They’ll either be finding the whole thing dreadful, like you, or be a Class-A weirdo who everyone else is avoiding. Either way, you’ll have someone to talk to.

Tell some outrageous lies
Forget all the bullshit about being authentic and keep yourself entertained by lying. For example, you’ve been sent by Google to scout for new talent at this depressing networking event in a budget hotel conference room in Nantwich. If anyone believes you, you’ll know to hate them immediately.

Set off the fire alarm and run like f**k
If all else fails, activate the nearest fire alarm and leg it to nearest boozer. Alternatively, just set the building on fire.