Scotland wins Git of the Year

SCOTLAND has won the first ever Daily Mash Git of the Year award.

The small, cold, northern European hell-hole beat off stiff competition from rival gits including Russian maniac Vladimir Putin and Anyone Who Lives in a Converted Barn.

Professor Henry Brubaker of the Institute for Studies said: ”All sensible people would agree that Scotland has been a massive pain in the arse this year, not least to itself.

”’Git’ almost seems inadequate, but if we’d used anything stronger someone probably would have reported us on Facebook.

”Scotland can now take pride in being more unpopular than both Vladimir Putin and people who live in converted barns.”

Scotland said: “This is an English conspiracy. I demand a recount.”

The award was based on the votes of over 10,000 misanthropes, whose worthless opinions were then compared to those of a panel of self-appointed experts. 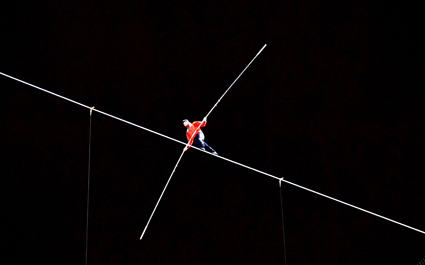 THE death-defying exploits of Nik Wallenda will inevitably become an underwhelming Hollywood film, it has emerged.

“This story has all the ingredients of workmanlike cinema fodder – an ending which is a foregone conclusion, 3D-friendly spectacle and tired themes about triumph over adversity.

“We’ll chuck in some love interest, an annoying kid and an embittered wheelchair-bound mentor.

“Probably it’ll be called Wings of Freedom, Sky Strider or the more self-explanatory Man High Up.

“You’ll end up watching it on a long flight, in a hotel or on telly next Christmas.”