Sofa night with David and Nicola

ANOTHER night in with David. I don’t understand why he’s suddenly so weird about sharing a sofa with me.

It wasn’t always like this. I remember the days we’d sit up for hours in passionate debate about Trident and local stabbings. Now look at him: watching Atlantis in a pair of slippers his mother got him out of BHS, which by the way smell like a leper has had ear discharge into them.

I try to liven things up with some conversation: “You know, I think I left my fuchsia cardigan at the SNP party conference.”

He makes a grunting noise.

“You know the one with the thistles on it I bought in Monsoon? For £95?”

We stare at each other for about eight seconds and then he goes back to Atlantis. So I change the subject.

“BGT is on the other side,” I suggest, helpfully.

He lifts the remote as slowly as possible, and changes it to BGT. It’s adverts. He quickly changes it back to Atlantis. I remain silent for a minute or so then express my feelings by doing a very quiet tut.

We are now watching CSI Miami. I normally enjoy a bit of sleuthing, but tonight I can’t concentrate because he’s breathing with his mouth open and something inside his face is making a loud clicking noise.

He says nothing but does a long sniff and then swallows loudly.

“You know, I was chatting to Natalie Bennet after the debate and she says Loratadine works wonders for her daffodil allergy.”

He turns the volume up by three bars. It’s now at fourteen, which in my view is excessive.

“CAN I GET YOU SOME LORATADINE?” I am raising my voice because it would appear he doesn’t understand.  He leaps to his feet and throws the remote; it hits me in the shin.

“Och, ya wee bastard!” I hiss, clutching my injured leg. I yell at him “What was that for?!” as he stomps off.

I’m alone on the sofa. I think he’s in the toilet because I can hear him playing Clash of Clans on his iPad. Sometimes I wonder why he can’t be more like Horatio Caine off CSI. Then we could stay up on the sofa speculating about ‘gun shot residue’ and ‘nailing the perp’. Also, he would know exactly where to look for my fuchsia cardigan. 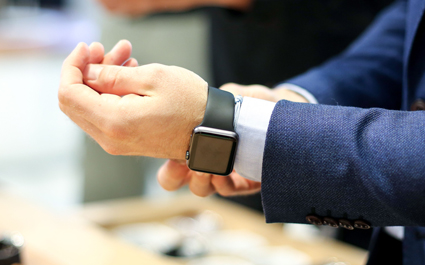 He said: “I had it all planned out – not saying anything about it, but then somebody just notices and goes ‘is that the new Apple Watch?’. I would respond simply with a wry Clooney-esque smile and they would mouth the word ‘awesome’.

“What actually happened is somebody said ‘what the fuck’s that weird-looking thing?’

“I explained that it was the brand new Apple Watch and they went ‘HAHAHA’ in a really deliberately hurtful way. The accounts assistant said it was the opposite of a fanny magnet and everyone cracked up.

“Then everyone started pretending to talk into their watches, saying things like ‘come in KITT, I am a massive tosser, please help’.”

By 10am Logan had removed the watch. He explained: “It wasn’t because people were being sarcastic, I just had a hot wrist, everyone gets a hot wrist sometimes.”