UNIMAGINATIVE, ill-considered advice for parents and their teens during GCSE exam time.

With millions of young people facing exam pressure, here is some worthless advice for parents and relatives to deliver in a ‘kind’ tone of voice.

Relax the night before the test

A stupid idea. Remember when your son forgot his Rasta-man dreads hat on Crazy Hair day even though you reminded him like eighty times? Your children are a bunch of gimps who can’t retain any information in their heads for longer than three seconds. If they aren’t weeping into their past papers until the exam starts, you may as well get the army on speed dial right now.

You know who else left school with no qualifications? Pan, God of Mountains. And now he has to spend all his time blowing his silly flute, having sex with goats and teaching shepherds how to wank. There’s probably not a day goes by that Richard and Pan don’t think to themselves “If only I’d read up on the ionisation energy of boron, I wouldn’t be degrading myself in this way.”

O Levels were much harder

No they weren’t, because you didn’t have an electronic network containing all the pornography ever made to distract you. Staying focused for more than 12 seconds while having a broadband connection requires a Herculean act of will.

At least bin men get to be outside in the sunshine and ride around in a cool lorry. Which is better than the shitty marketing job which is the realistic pinnacle of your aspirations unless you’re lucky enough to have rich parents who send you to school in an old cathedral.

I’ll be proud as long as you do your best

No you won’t. When they open that envelope in August and it’s all Es and Fs, you’ll just feel guilty for marrying your cousin. 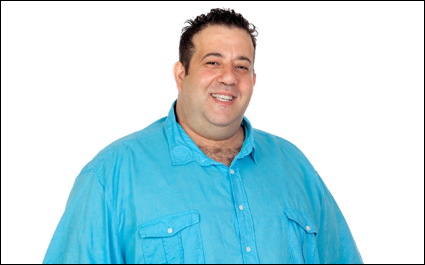 38-year-old Norman Steele has been targeted by patronising supportive remarks for being a larger nightclub dancer.

Steele was busting moves to the Ghostbusters theme tune at his local Evolution club when people began shouting praise.

He said: “This group of blokes were shaking my hand, saying ‘nice one mate’ and ‘let us buy you a pint’. I was confused because I am shit at dancing.

“Then a really super attractive girl gave me a rose which was doubly puzzling. Suddenly the penny dropped – it was all because I’m fat.

“My message to all those people being extra nice to me on Friday night is fuck off. I am not your performing pony. I am a fat guy shaking his shit.

“Just because I’m big, I don’t need your stupid encouragement just to do normal stuff like going out, washing my car, or indeed eating a kebab. I blame the internet.”

Nightclub-goer Emma Bradford said: “Chubby people in clubs love my unsolicited comments like, ‘you’re a big beautiful mover’ or ‘you are an ambassador for your kind’.

“Just like wheelchair-using strangers love it when I lean over them and go ‘nice one mate’ while doing a double thumbs-up right in their brave faces. I’m an awesome person.”