The Mash 'Who to Vote For' Test

THE election is coming, you haven’t been listening and are deeply confused about what to do.

Our simple questionnaire will reveal the party that best caters to your stereotypical personality.

The Daily Mash Who to Vote For Test

What is your favourite animal?

What is your favourite meal?
1 A nine course tasting menu with wine, or just the wine followed by some drink-driving.
2 Tapas, or the Iceland equivalent thereof.
3 Shallow fried yams and an oblong of curd.
4 A roast dinner (carvery, not a fancy one with organic vegetables and all that bullshit).

What is your favourite film?
1 That one where Michael Caine kills those little chav bastards.
2 Local Hero or a Richard Curtis-type comedy with sad bits.
3 Koyaanisqatsi and its sequel as a fun double bill.
4 Any On The Buses or Carry On… film, or the uncut version of The Dambusters where the dog has a racist name.

Which of these dreams sounds most familiar?
1 Something depraved involving Deborah Meaden on a leopard rug.
2 Wandering alone in a strange futuristic world where you have no discernible identity.
3 Dolphins swimming around in harmony, then bad men with harpoons come and you wake up in a cold sweat.
4 Going on a samurai sword rampage because of poor service in a tea shop.

What is your favourite book?
1 The most recent Top Gear Christmas book.
2 Tony Parsons’ Man and Boy.
3 Jonathan Livingstone Seagull or anything printed on recycled paper.
4 Churchill’s History of the English-Speaking Peoples, or a 90s adventure book about submarines.

Mostly 1s: You are a Conservative or a serial killer.
Mostly 2s: You are a Labour voter. Good luck with that.
Mostly 3s: Vote Green, but for Christ’s sake don’t tell anyone.
Mostly 4s: Just put your claw mark where it says UKIP. 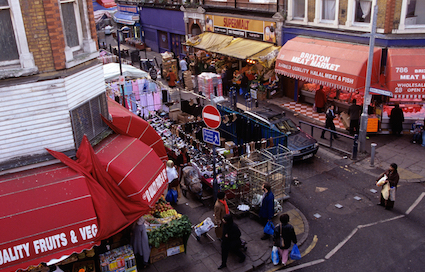 THE Guardian has condemned the middle-class gentrification of Brixton by its own readers.

The paper has backed the Reclaim Brixton campaign to stop working-class, ethnic minority groups being priced out of the London borough by white, liberal, middle-class people who work in the media.

Nikki Hollis, a Guardian columnist who lives in Brixton, said: “I’m having all my dreadful friends over for supper so we can discuss what to do about ourselves.

“We’ll probably force one of the local delis out of business, which would make the area five percent less desirable.”

Guardian reader Tom Logan said: “Brixton has changed so much since I moved here from Guildford six months ago to the flat my parents bought me on Coldharbour Lane.

“The African-Caribbean community is being forced out by white Guardian readers who want to live here because it’s associated with riots and reggae.”

He added: “I live here because The Clash once wrote a song about it, which is totally different.”

Donna Sheridan, 61, who moved to Brixton from Trinidad in 1965, said: “I think the Guardian readers are quite nice. Completely full of shit, but nice.”