Most of Britain’s new objects taken directly from shop to big building near motorway.

Mancini to buy entire Arsenal squad for a laugh 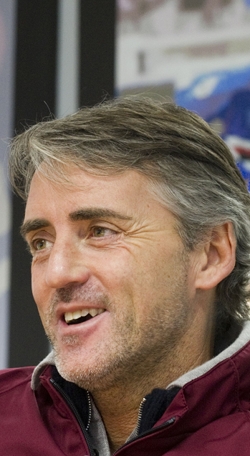 ROBERTO Mancini will purchase every member of Arsenal’s squad, with the obvious exception of Eboue, just to see the look on Arsene Wenger’s face.

After his signing of Clichy and the bid for Nasri enraged the self-proclaimed ‘Professor Of Third Place’, Mancini will continue buying the rest of their former teammates every couple of days until Wenger performs an as-yet-unnamed forfeit.

Mancini said: “By the time we get to Bendtner, it’s going to be obvious we’re just taking the piss, but to be honest that’s just going to make it even better when we follow it up with a £21m bid for Almunia.

“It’s going to be difficult to keep a straight face when Almunia holds up a City shirt up, especially as he will drop it several times – but it’ll be totally worth it.”

Mancini has also asked City’s billionaire owners to buy Arsenal’s Emirates Stadium and rename it the ‘Arsene Stinks Of Piss Stadium’ as the cherry on the top of his elaborate prank.

Footballologist Wayne Hayes said: “To draw a Panini football sticker analogy, Wenger is the kid who carefully buys a packet every now and then and makes the most of the players inside whereas Mancini is the flash kid whose dad just buys him a whole box of them to keep him quiet.

“The current disagreement between them is the equivalent of Mancini getting Wenger in a headlock behind the PE block and demanding he hand over the few cards still in his ‘need’ pile.”

Despite Mancini’s prank injecting hundreds of millions of pounds into Arsenal to rebuild the squad, the money will be useless as the Italian plans to follow Wenger to every transfer negotiation and offer an extra 50p on top of whatever Wenger bids.