“It made me into a supercharged fanny magnet,” says shocked political journalist.

Bestival fun continues for those in charge of litter and faeces 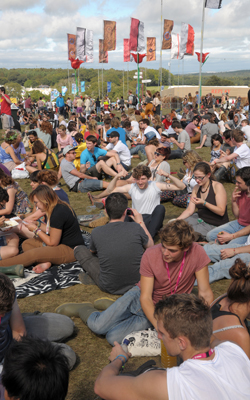 THE workers responsible for rubbish and human shit are having a rocking time today at the site of the Bestival event.

Bestival attracted thousands of crazy, flamboyant festivalgoers to its Isle of Wight site over the weekend, where they enjoyed magical moments, fancy dress and acts including Stevie Wonder.

But while most have returned to their mundane jobs, an elite group of workers is still having an awesome time removing their detritus from the site.

Toilet operative Stephen Malley said: “There’s a real buzz about the site this morning as I attach this pipe to another pipe and hoover tonnes of liquid shit into this tanker.

“The smell is totally amazing and crazy, in this really unique way. It’s the smell of love, I guess.”

“That’s amazing because I was just thinking about condoms. Total synchronicity.”

Highlights on the Bestival site this morning include a hand-painted sign saying ‘Free Hugs’ which has been trampled into a ditch, and the lost car keys of a festivalgoer who is currently having a fucking nightmare.