Hamilton torn over whose cars to crash

LEWIS Hamilton is facing a dilemma over which team’s cars he is going to smash into a wall, it has emerged.

The accomplished car demolisher has been having a difficult time at McLaren, as Formula 1 chiefs doggedly refuse to award points to competitors who cross the finish line pedalling the remains of their car with their feet, like Fred Flintstone.

Hamilton said: While Ferraris new fuel intake design offers better speed through the corners, into the gravel traps and against the barriers, Lotus are doing some interesting things with their collapsible bumpers and wings that just pop off at the merest shunt.

Wherever I go they will need to have the right blend of ambition, innovation and fully-functioning airbags.

Hamilton has vowed to stay focused on his crashing for the rest of the season, ensuring Mclarens engineers have to work late every weekend piecing back together vehicles like multimillion pound Airfix models.

Other constructors are already preparing bids to tempt the former world champion, as the not-sport comes to terms with the fact that the crashes are the only thing normal people are interested in.

Mercedes have tabled a bid worth £60M over three years for Hamilton, £52M of which is for medical insurance.

Motorsport agent Tom Logan said: Lewis is a valuable brand and can guarantee sponsors that their logo will be seen on news channels across the world, even if it is in slow motion, upside-down and on fire. 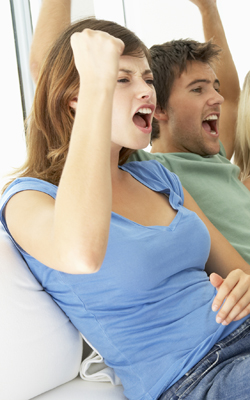 AFTER weeks of Olympics, Britons are celebrating the end of disruption to the television schedules.

Thousands will line the streets of London this afternoon for a special ‘homecoming’ parade celebrating the heroes of televised light entertainment, many of whom were moved to BBC2 or dropped altogether while the Olympics and Paralympics were on.

Sarah Beeney will lead the procession on behalf of property programming, carried aloft on a golden throne by Kirstie Allsopp and the hosts of A Place In The Sun.

The parade will also feature Melinda Messenger and her little bald co-host, representing shows about bad builders, and a woman with gonads from the forthcoming Channel 4 documentary The Woman With Gonads.

Other celebrities will include the surviving stars of the black and white war films that will now be on in the afternoons.

Television fan Emma Bradford said: “The Olympics was fun but when I turn on my television I want to see people whose lives are worse than mine – either they’ve got suppurating nodules all over their genitals or they’ve been shot in the face by Kiefer Sutherland.

“These high achievers with their big grins get a bit wearing after a while, to be honest.”

Father-of-two Stephen Malley said: “Sport is all very well but Holby City has been trapped in the gay intellectual ghetto of BBC2. Also I want to watch a programme about cakes or people opening boxes.

“Ideally people opening boxes with cakes in them.

“However after the Paralympics I’m keen to see more disabled people on our screens, especially if they are wrestling gypsies in a jungle location.”

During this afternoon’s symbolic event, Olympic and Paralympic champions will remove their medals and hang them around the necks of television personalities.

Olympic gold medallist Nikki Hollis said: “Running fast is one thing but I couldn’t go to a touristy antiques fair, negotiate a knock-down price on an Art Deco figurine, then auction it for a small profit while delivering consistently witty pieces-to-camera.

“These guys are the real heroes.”