Britain accused of colonialism by guy who played man who went out with Phoebe and her twin sister but then slept with the twin sister because he thought it was Phoebe. 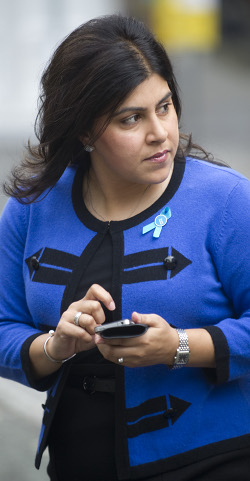 DAVID Cameron has let Baroness Warsi out of her box again.

Warsi was released from the box, which is kept under the floorboards in the prime minister’s private study, yesterday evening so she would have enough room to write an article for the Daily Telegraph without constantly banging her elbows.

A Downing Street spokesman said: “We had heard muffled shouting all afternoon. It was getting really distracting so eventually we lifted the floorboards, opened the box and she popped her head up screaming ‘I’ve got an idea! I’ve got an idea!’.

“She then explained how Britain should relaunch the Spanish Inquisition only it should change the name of it to the ‘British Inquisition’ because that would be a sign of ‘confidence’.

“Then she said the government should never have banned Christmas.

“We all stared at her for about 30 seconds until the prime minister nodded and said ‘yeah, let her out’.”

Warsi is now on her way to Rome where she will have talks with the Pope until he pretends to have gastro-enteritis.

The Downing Street spokesman added: “We should have her back in the box by tomorrow lunchtime. But if she gets lost and you find her, just keep her warm, give her a Hobnob and then phone the fire brigade.”