DOCTOR Who assistants Amy and Rory Pond are to die after being left locked in a poorly-ventilated Tardis.

The intrepid companions will be seen expiring this weekend after the Doctor ‘nips out to get some fags’.

But it is a hot, sunny day outside on the planet Zartan and the the Time Lord forgets to wind down the windows on the Tardis.

Show runner Stephen Moffatt said: “It’s a sad, cautionary tale. And so sadly ironic, of course, given their aquatic surname.” 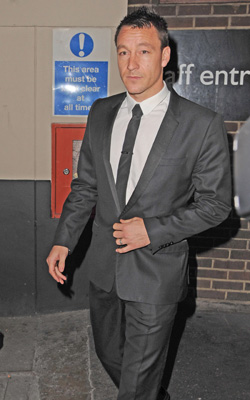 FOOTBALL fans have asked for guidance on what to call John Terry.

Footballologist Wayne Hayes said: Were in the strange position that Terry both is and isnt a racist, posing not only a legal quandary but also the possibility that he is existing in two quantum states of bigotry simultaneously.

Football chants dont lend themselves to nuance, so the FA needs to clarify whether a whole stadium is going to be sued for making up a rhyme for the word Nazi to the tune of Go West.

Amid the confusion fans have had to use equivocal chants such as Terry is a racist, (although that has never been proven to the criminal standard) and Ooh ah, doubts linger.

The FA has been asked to confirm the legal standpoint by the time Terry returns from holiday, to ensure no time that could be spent berating him is wasted.

Hayes said: I am advising fans to stick to chants about where Terry puts his penis, his mothers shoplifting and his fathers cocaine dealing.