45-year-old gets two-day hangover after looking at pint

A 45-YEAR-OLD man is still bedridden with a steaming hangover 48 hours after glancing at a pint of Stella Artois.

Joseph Turner walked past a pub on Monday night and ever since has been suffering from symptoms that include dizziness, an inability to get through a sentence without groaning, dry heaves and a craving for a greasy bacon sandwich.

HE explained: “I only walked past the King’s Head on my way to little Tesco for some bits. There were these young lads drinking outside and they all had pints. I bet they had two or three each and were fine.

“Meanwhile I’d allowed my stare to linger on the amber nectar a few seconds too long. By the time I reached the checkout my head was thumping. On the way home I was sick in the gutter.”

Wife Melanie said: “He should know better at his age, allowing his eyes to focus on a pint of beer, and on a Monday too. At least leave it to the weekend so you’ve got time to recover.”

She added: “Not that I’m any better. I saw a bottle of red wine on Instagram last week and couldn’t drive until Friday.” 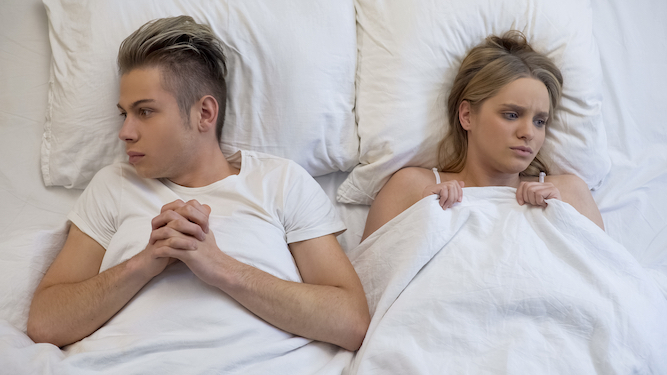 A COUPLE in a new home with an en-suite bathroom never knew how intimate they would become with each others’ excretions.

Tom and Jenny Logan saw the en-suite as a real plus for the home but after just a few weeks are wondering if either of them has any secrets left.

Jenny said: “We’ve been together six years. I thought I knew everything there was to know about Tom. But I’ve been introduced to some sounds that are entirely new.

“Also some powerful odours, and the shower cubicle creaks when put under certain kinds of repetitive strain. Like a big heavy bloke in there with his feet planted apart tugging himself off at 6.30am and waking me up.”

Tom said: “Yeah, I guess I knew Jenny defecated in theory but I’d never been that close to it before. We eat the same meals. So why does it stink like that?

“I can’t look her in the eye any more. Not now I’ve heard those grunts of effort and seen that post-dump flushed face.

“They should put toilets outside at the end of the garden again. I’m writing to my MP.”