Are you stupid enough to be an anti-mask protestor?

IDIOTS are protesting against the outrageous idea of wearing a face mask during a pandemic. Are you enough of a cretin to join their ranks?

Do you think masks go against your human rights?

A) Of course not. They’re designed to keep people safe, like seat belts and bicycle helmets.

B) They’re the first step on the road to establishing a fascist police state. That’s why I won’t wear one when I pop out to buy the Mail.

You see someone wearing a face mask, how do you feel?

A) Relieved because they’re taking actual precautions rather than relying on ‘common sense’, which the UK public has proved they don’t have.

B) Outraged at their stupidity. If this virus isn’t a hoax, which I suspect it is, the best solution is to rip down 5G towers because they’re designed by foreigners to sprinkle nasty germs on us innocent Brits.

What do you think of the phrase ‘nanny state’?

A) It’s a condescending buzz word used by tabloids to provoke outrage, and it hurts my feelings.

B) There’s no better way to describe our loony left, ‘elf ‘n’ safety gone mad culture. If I want to meet up with a crowd of potentially infected people and come down with a lethal virus, I should be allowed to do so.

What other protests have you been to?

A) I watched the Black Lives Matter protests unfold online and shared some memes about it, does that count?

B) I stormed Parliament Square in a drunken rage because protestors were saying white lives don’t matter. Okay, they didn’t actually say that, but you can tell it’s what they really meant.

Mostly As: Sorry, you’re too much of a limp liberal to be an anti-mask protestor. Spend hours scrolling through furiously angry Facebook groups then try this quiz again.

Mostly Bs: For once you’ve passed a test by being a bit dim. However, your righteous indignation burns so fiercely that you don’t care. 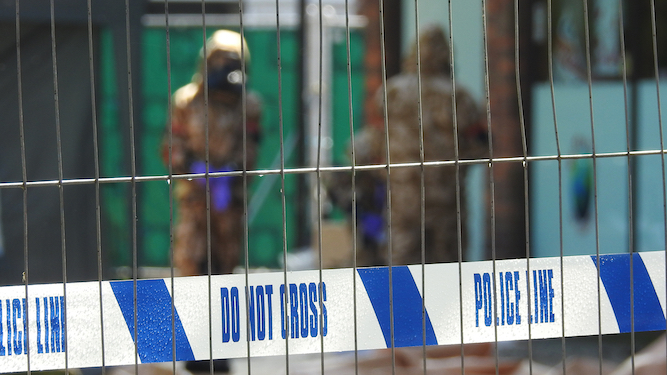 RUSSIA trying to subvert our democracy? Bo-ring. Who cares? Not the Tories. Here’s seven other plots against Britain we should never have looked into:

So Putin wants to kill a couple of traitors? That’s only how Sun readers feel about the Isis Bride. We should have let him get on with using his extravagantly toxic nerve agent and if Salisbury had to be abandoned completely, hey.

The assassination of Alexander Litvinenko

Perhaps a quiet word about the mess caused when strewing polonium-210 around central London wouldn’t have upset anyone, but ideally Britain would just have put it down to one of those things and moved on.

When the KGB’s gone to all the trouble of devising an umbrella that fires poison pellets to covertly kill a Bulgarian dissident, drawing attention to it is terribly gauche. Convey your respect for their craftsmanship through diplomatic channels.

Espionage used to be a career for gentlemen, and what gentlemen would have done when discovering double agents in their midst is say nothing rather than face awkwardness. Kim Philby would have made a damn fine head of MI5 if he’d been given the chance.

General Orlov wanted to advance Soviet interests by detonating a nuclear warhead on a US Air Force base in Germany. Well, what business is that of ours? We’re none of those three countries. James Bond should never have left the office.

Krushchev could have been building missile launch sites in Cuba for highly personal reasons. Better not to pry. And if the world had been destroyed in a nuclear war, wouldn’t it be better to say ‘nothing to do with us’?