SOMETIMES it can be hard to tell if you have a deep ideological belief in personal freedom or just like going out getting pissed. Find out:

Which human right do you value most?

A) Freedom of speech.
B) Freedom to sit in the pub all day so 30 per cent of my life is a blacked-out blur, I always feel like shit and never achieve anything.

What are your views on identity cards?

A) They are fundamentally un-British and I don’t need my papers checking by the Gestapo, thank you very much.
B) Anything that helps me get served in a pub is good. Microchip my neck like a dog if you want.

Which great thinkers have influenced your views on freedom?

A) I’d have to say John Stuart Mill and his classic work of political philosophy On Liberty.
B) Kenny in Spoons who says 10pm closing is the first step towards putting us all in teetotal concentration camps run by Black Lives Matter.

What form does your political activism take?

A) Mainly I retweet earnest things that I think my followers will respect me for retweeting. I like to think that makes a difference.
B) Last weekend I went on a protest march from the Red Lion to the kebab place, and I didn’t have a mask on. And I protested the health-and-safety Nazis by eating my kebab even after I dropped it on the pavement and kicked it trying to pick it up.

How far would you go to protect your freedom?

A) I would take up arms if necessary.
B) I would go to the off-licence after the pub closed and drink cans on the street.

Mostly As: You are a true believer in freedom, although you are a bit of a self-righteous knob and your main political text is Braveheart.

Mostly Bs: You are on the ‘liver damage’ end of the political spectrum. Try getting into bullshit libertarianism instead of Glen’s vodka. 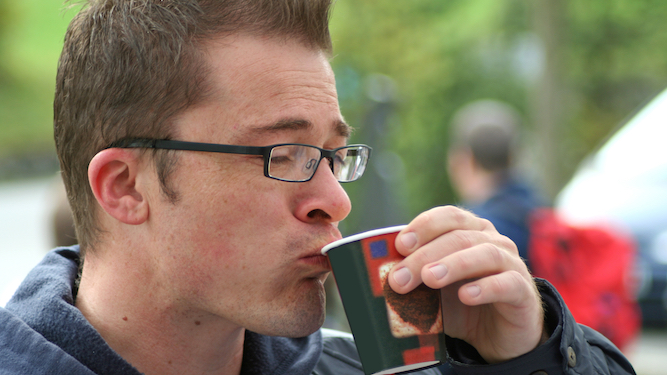 AUTUMN, the season of mists and limited edition coffees is here, but which matches your twat level at this time of year? Use our guide:

A coffee that screams ‘I’m afraid of growing up and don’t really like coffee’, traditionally shared on Instagram with the caption ‘#adulting’ despite the fact that it comes with two cute little gingerbread men coyly perched on the side of the plate.

Hold up the whole queue by demanding a ‘shot’ of sugary gunk is pumped into your otherwise satisfactory coffee. For extra twat points ask what they taste like, as if the names ‘hazelnut’, ‘caramel’ and ‘cinnamon’ weren’t self-explanatory.

Any drink that takes six words to describe will also be garnished by your barista’s bogey, because f**k you for making her do all that bullshit. You won’t be asked if you want squirty cream because otherwise we’ll be here all day.

Anything with a cinnamon stick

Turn your coffee into a bowl of potpourri with the help of a giant cinnamon stick. It will do nothing to affect the flavour of your drink and you will forget that it’s not a chocolate flake and take a greedy bite out of it.

The most basic and predictable of autumnal coffees, and therefore the most twattish. Just like Fight Club, the first rule of Pumpkin Spice Lattes is you do not talk about Pumpkin Spice Lattes, unless you want to be dragged out to the car park and beaten up. It’s no more than you deserve.