BRITAIN is still the best country in the world for consuming lager and gravy, with the average adult putting away eight pints of each per week.

The UK has far outstripped rivals, with many countries guzzling less than a pint of either liquid staple per week or even falsely claiming it to be ‘unhealthy’.

A spokesman for the UK Food Council said: “We don’t think our lead is actually as commanding as it seems. There’s no way Italy can survive on that little gravy.

“But nonetheless, we’re still well ahead of the pack when it comes to a pint of lager and a pint of gravy.

“It remains one of the few things that truly binds Britain together; whether in England, Northern Ireland, Scotland or Wales, go to any pub and ask for their cheapest lager and brownest gravy to be welcomed with open arms.”

“It’s no use. I just can’t choose between them.” 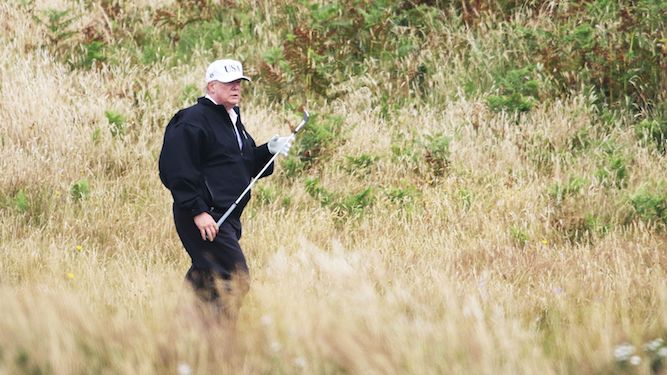 PRESIDENT Trump is lavishing $150m on the Aberdeen golf course where he will live out his days in exile from the USA.

Trump has promised to invest the sizeable sum into Balmedie to make it a resort fit for a world leader forced to escape his country with nothing but billions in stolen cash to comfort him.

A Trump insider said: “By 2020 we’re counting on Brexit having happened and the UK not having signed any extradition treaties, making it a safe haven for international fugitives.

“Trump will retreat to his compound to spend the rest of his days tweeting about how he is the one, true ruler of the United States and the charges against him are baseless lies.

“We’re currently fortifying the resort against CIA Black Ops and digging a bunker deep below the course where the disgraced former president, and his gold, will hide from international legal proceedings.

“We’re building a few cottages for friends, family, and fellow co-conspirators. Nigel Farage has already reserved his. Half a million in cash in a duffelbag.”