EVERY dad likes whisky. That’s just a fact. But whisky is also a great way of telling your dad that things haven’t worked out how you hoped cashwise and even securing a small loan.

These brands are a caring, subtle way to tell your father that you’re on the outside edge of your overdraft and are considering payday lenders:

Grant’s – A blended whisky favoured by those unafraid to mix it with a full can of full-strength Coke, Grant’s forcefully announces that destitution is only a short step away.

Bell’s – You had such high hopes for me, dad. I hate to let you down. So this bottle of Bell’s – not even a litre – must say what I can’t, which is that I’m unable to pay the rent for the third month running.

Sainsbury’s Basics Scotch – “It’s actually a decent drop,” you say, eyes bulging with despair. Later you demonstrate how far you’ve sunk by adding water to it in a pathetic pretence of sophistication. If he doesn’t offer help, beg.

Ice tea in a Jura 12-year-old bottle – Dad will put this away for later, because it’s too good to open at Christmas while everyone’s got a ruined palate. While he’s doing that go through his wallet and run.

Men still struggling to describe how they want their hair cut 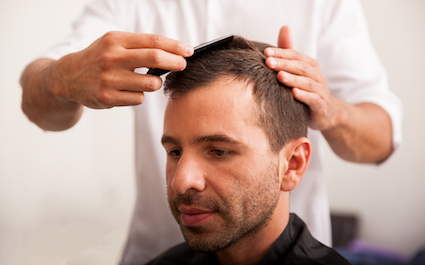 MEN have admitted that no matter how many haircuts they have had, they still fall into a state of mumbling idiotic confusion when asked how they want it done.

Nathan Muir, aged 35, recently went for his sixth identical cut of the year but could only describe the style he wanted with the stumbling, halting panic of a rural simpleton who has just sighted a UFO.

He said: “I wanted something a bit cool so told the barber I wanted it kind of smooth but ruffled and he looked blank, like I was asking a mechanic to sex up my car.

“I further explained ‘You know, kind of wild but tamed? Work hard play hard?’ and he began to back away as though I was making a pass.

“I fell silent and he said ‘Short back and sides?’ to which I gratefully agreed to end the awkwardness.

“How do pop stars get their fancy haircuts? Do they have a special code?”

Men’s stylist Tom Logan said: “Men’s haircuts cannot be described in language. Even the fancy ones you see on TV are just accidents.

“I just ask ‘Like a twat or not like a twat?’ Then I just snip around and see what happens.”