How to survive being back at work and still hungover

ARE you feeling sh*t this morning after overdoing the booze all weekend? Here’s how to get through the terrifying day ahead.

Find some easy stuff to do

Pretend you need to ‘sort out’ your desk drawers or photocopy ‘important’ documents. This only works if you have a cr*p office job but let’s face it, you’re not a top barrister or captain of an aircraft carrier, so start tidying those paper clips.

Have a vomiting strategy

It’s hard to be sick in a bin and still look professional, no matter how passionately you say, “I just KNEW there was something wrong with that salmon last night!” Monitor your nausea closely and be ready to walk abnormally fast to the nearest toilet at a split second’s notice.

Easier said than done, but keep reminding yourself that paranoid thoughts are just alcohol poisoning. For example:

● You are NOT going to pass out, leading to your shameful drinking habits being revealed, getting the sack and spending the rest of your life in a hostel.

● Your co-workers are NOT secretly laughing at what a reprehensible tossbag you are. They are just pretending to find Gavin’s tedious pictures of his kid’s birthday delightful.

● You are NOT going to get trapped in the lift while the building catches fire and you die a horrible death. That’s just stupid. Get a grip.

Go to the pub ASAP

Your nerves are probably too frazzled to cope with intimidating colleagues, so hide from them. You’ve only got to make it till 5.30pm, so if it means playing a ridiculous game of cat-and-mouse in the corridors like Ripley in Alien, go for it. 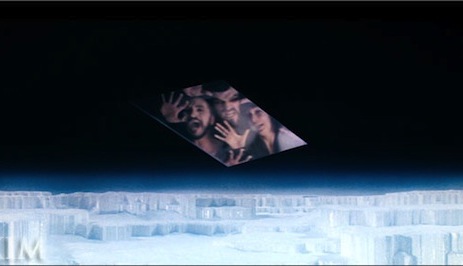 DONALD Trump has ditched plans to fire a nuclear missile at a hurricane after officials told him it would rupture the Phantom Zone, releasing a trio of super-villains.

Trump had insisted that ‘hurricane bombing’ was entirely safe, but backed down when the Pentagon warned him the would be forced to kneel before General Zod.

A source said: “It was touch and go because he thought he had a chance with the the short-haired female super-villain. But ultimately he is terrified of Zod.

“He also said he wants to buy Greenland so he can turn the Fortress of Solitude into ‘classy resort’.”

A White House spokesman said: “The president kneels before no-one. He just dropped his keys in front of Vladimir Putin, that’s all.”