The Downing Street office reeked of wood polish and Tory man musk. In my former life – debating some half-baked ‘double garage tax’ with Vince Cable over lasagnes at the Ramada Inn – I had been confident, domineering, a leader of sorts. But this was the pheromone-scented gorilla nest of power. His world.

He swivelled in his chair as I entered. I noticed that He was eating a peach, noisily.

“What the fuck do you want, Clegg?”

I realised my mind had gone blank. Why had I come? Student fees? Some tax or other? It no longer mattered. I was the rabbit. He was the headlights.

He sucked out the peach stone, like some pedigree sex hoover, and spat it into my forehead, making a small dent.

“Who gives a rat’s cock what you think, you worm?”

“You realise that vanity title is nothing but longhand for ‘Fuck Pony’? It’s meaningless crap. There is only one truth in this world, Clegg…pain.”

He laughed, mirthlessly, rapaciously, revealing strong canines utterly unlike Vince Cable’s dentures, which were fit only for weakly sucking at pasta sheets.

“Let me show you something, Clegg. It is time for your initiation to begin.”

He pressed a button on his desk and a section of oak panel slid back. A hooded figure emerged from the rectangle of darkness. Although its face was covered, from the aimless limping gait and laboured breathing I could tell it was Michael Gove, dressed as a member of the Spanish Inquisition.

“Take him into the playroom Michael, and strap him to ‘Le Pouton’.  Shave him top and bottom, I’ll see to him after this conference call.”

With the phone handset wedged between chin and shoulder, He opened his desk drawer and removed something that looked like a ping pong bat studded with nails.

Michael Gove looped a rope around my wrists and yanked them hard behind my back.

Gove, who is surprisingly strong, dragged me into the secret room, where strange devices gauged to inflict both pain and pleasure lined the wall.

I felt scared and demeaned and excited, knowing no one would hear my screams when He finished his conference call and came to administer his terrible, loving punishment. No one…

Bull blames all its problems on testicle envy 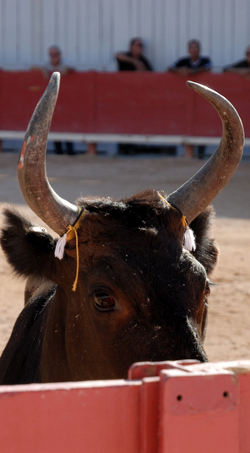 A BULL has claimed that its species is being victimised for having testicles much larger than those of humans.

He said: “If I had smaller bollocks, like a labrador, I’m certain I would be left alone to do the things that I like to do, principally eating grass, standing under trees and clambering awkwardly onto heffers.

“But because we bulls have bigger stones than the average male human fuckwit, there’s a weird dynamic that means they have to constantly ‘test themselves’ against us in some idiotic fashion.

“It’s definitely a ball thing. No one ever goes ‘look how long that squirrel’s tail is, let’s stick spears in it until it bites us’.”

Logan gored a student through the leg during his forced rampage through the streets of Pamplona.

He said: “Everyone’s like ‘ooh he gored someone, bulls are so aggressive’.

“Well guess what – I’ve got massive horns sticking out of my head and you’re making me run down a crowded street full of drunk people. Whether I like it or not, someone’s getting impaled.

“I did shout for an ambulance but everyone thought it was a bellow of animal rage. You simply cannot win in these situations, I tell you.”