Adele gig confirmed as worst place to be on drugs

AN ADELE concert is absolutely the worst environment in which to take mind-altering drugs, it has been confirmed.

34-year-old Stephen Malley grudgingly accompanied his wife Susan to the first date of the singer’s tour, where he decided to alleviate his boredom with a tab of LSD.

He said: “At first it was pretty good. She did Rolling in the Deep just as the acid started to kick in and I got goosebumps.

“Then she began chatting about how she always needs a poo before going on stage. Was this really happening?

“Panicking, I looked for a fire exit but there was a sea of spiky mum hair in every direction – they looked like thousands of poisonous plants.

“They were drinking out of those big plastic wine glasses that have tinfoil on top. Definitely nobody else was off their head.

“Now I was properly tripping out and Adele was still chatting on about going to the soft play centre with her kid.

“I hallucinated that she had two bulging Lidl bags on stage, and was taking Kinder Bueno bars out and throwing them into the crowd. Maybe it actually happened? I passed out then and woke up in the car.”

Susan Malley said: “The atmosphere was amazing, especially when she had the whole arena chanting ‘All men are bastards’. I don’t see how you could not enjoy that.” 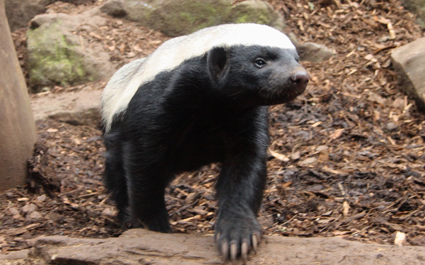 Ferocious Africa-based honey badger Wayne Hayes has travelled to the UK to advise his cousins on how to fuck humans up.

During a meeting in a secret training sett, Hayes said: “Human testicles are located, as you may expect, between their hind legs.

“The trick is to run at them in a zig zag pattern while snarling. Use your foreclaws to gain purchase on their trouser fabric, then scrabble towards the genital area.

Badger Tom Booker said: “I was always taught to shy away from humans unless trapped in a garage. I’m not even sure I want testicles in my mouth but I suppose desperate times call for desperate measures.

“That honey badger is mental though, I just saw him eat an adder like it was a liquorice stick.”