All ITV Shows To Be Based On Google Search Terms

ALL future ITV shows are to be based on popular Google search terms following the huge success of last night’s new primetime drama Billie Piper Dressed as a Whore.

Alan Whicker will present the new travel series A Man with Two Cocks, while Clive Owen will take the lead role in the four part action series Cheap Car Insurance.

Michael Grade, ITV chairman, said the new schedule demonstrated ITV’s firm commitment to giving the viewers exactly what they wanted, particularly if that was an hour a night, five days of week of Richard Madeley being hit on the head with a brick. “It’s what we call appointment to view television,” he said.

“The whole idea came to me one night when I was cleaning my computer keyboard after a few hours on the internet. Suddenly I realised that Google search revealed our innermost thoughts and desires. I went straight back into the office the next day and commissioned Filthy Sex Nude Girls, and the first one goes out on Saturday at tea-time,” he added.

Meanwhile Emmerdale is to be renamed Lesbian Shower Fun while The Bill will be called Organic Box Delivery. Michael Parkinson will continue to present Toss Wank Fuck Knob on Saturday nights.

Wayne Hayes, professor of broadcasting studies at Dundee University, said: “ITV has shifted its focus from fleecing drunken morons with rigged phone quizzes to appealing to sex crazed loners and depraved lunatics with utter filth. It makes a lot of sense.” 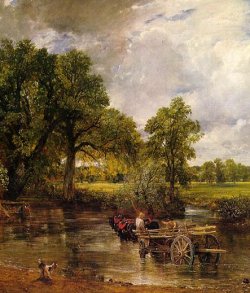 CONSTABLE'S masterpiece The Hay Wain has been arrested in central London amid claims of nude horse exploitation.

The archetypal English rural scene, painted in 1821, features a pair of semi-naked horses pulling two fat men in a big cart through a stream.

Superintendent Bill McKay said: "The painting is now in custody where our experts can study it to see if it makes them come over all unnecessary."

Constable used to spend summer weekends near Flatford Mill in Suffolk, where he would coax horses to pose nude while he sketched them in charcoal.

On several occasions the horses would be invited to his studio in London where he would create risqué watercolour cartoons and sell them to Members of  Parliament.

It was at Flatford in 1821 that he paid two fat men in a cart to pose with their wet, scantily-clad horses while on their way to a toddler fight.

A spokesman for the RSCPA said: "Horse exploitation makes me so angry. Grrrrrrrr.

"But when I see horses stripped down to their pants and trussed up like a couple of donkeys, I say, 'enough'."

He added: "As the pervert Constable is dead, the logical thing to do is arrest the painting itself. Examples must be made."