CHILDBIRTH is to be made longer and more painful amid fresh claims it has been 'dumbed-down' to meet Government targets.

Alan Johnson, the health secretary, said the length of labour would be increased to eight hours, from the current five, and that midwives would jab women on the thighs with knitting needles for the last 30 minutes.

He said the new regime would deliver longer cigarette breaks for doctors and nurses and help breed a new generation of super-tough mothers with 'vaginas of steel'.

Under the new guidelines all women will have to deliver their babies in birthing pools, which experts said worked in exactly the same way as modern pain-relieving drugs, except they did not relieve pain.

Mr Johnson said: "In the last hundred years there have been enormous advances in medical technology. That's why we have decided to force pregnant women to sit in a glorified bucket for eight hours screaming their heads off like cavewomen and begging for drugs. It's only natural.

"Look at fish. They give birth in water all the time and you never hear any of them huffing and puffing and screaming 'don't you ever put that me in again you evil fucker' at their husbands. Our mums must learn to do the same.

"And if the birthing pool isn't sore enough we can always get the midwife to drop in a toaster."

Dr Wayne Hayes, head of psychology at the University of Dundee, said the Government's decision to make childbirth even more agonising obviously reflected an unconscious desire to punish women for having sex.

"You have to remember these people are not just sick, they're like the little girl in The Exorcist," he said. 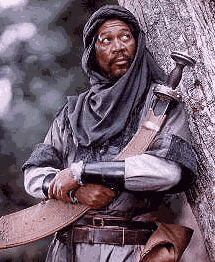 THE early history of Britain is 'horribly white' and should be rewritten to include the black and Asian people who weren't there, the country’s equality chief said last night.

Trevor Phillips said he had read a number of key texts on the Middle Ages and not one had mentioned the major part played by Morgan Freeman in Robin Hood: Prince of Thieves.

He said the only dark skinned character to feature regularly in works on the medieval period was the Black Death, which he described as a “typically negative stereotype” of people of colour.

Mr Phillips said: “Read the Venerable Bede’s Ecclesiastical History of the English People and you could be forgiven for thinking that 8th century Britain was almost entirely free of people of Afro-Caribbean or Asian origin. It’s a disgrace."

Mr Phillips is calling for the introduction of a quota system into British history writing to ensure that at least 10 per cent of major historical figures are black or Asian, including monarchs.

He wants Henry V, Elizabeth I, and the current Queen to all be black but not John, Richard III, Oliver Cromwell, or Ethelred the Unready.

He said: “How can any of our young black and Asian youth in the inner cities ever aspire to work hard at school with a view to becoming a King of England if they are constantly told by history that this is job is for whites only?”