THE latest batch of hopefuls on The Apprentice are known even to themselves by generic names like ‘The Blonde Woman’, it emerged last night.

It has been confirmed the competitors are distinguishable from each other only by hair colour and gender, due to a total absence of other human attributes.

One contestant, who calls himself ‘Scottish Brown Haired Man’, wrote on the application form that he lived in ‘a building’ and that his next-of-kin was ‘another person’.

A BBC spokesman said: “It’s like they hatched out of pods. Creepy, but also confusing because there are three people called ‘Brown-Haired Woman’.

“For expediency’s sake we tried giving them numbers but they all started fighting over who was going to be ‘Brown-Haired Woman 1’, with each saying that it should be them because they had the most management experience.

“I think we can safely say that they’re not what we would understand as ‘people’. We suspect they’re some sort of drifting, cosmic fungus that has hit Earth and started shopping in Tie Rack.”

Bill, the father of one of the contestants, said: “There was a big electrical storm over our house and nine months later my wife gave birth to ‘The Gingery Woman’. Even then she looked about 30.

“I remember her first words were all weird, nonsensical conflations like ‘Posi-centivise’ and ‘Super-tivity’. We never bonded.

“After about two weeks she encased my wife in a gelatinous cocoon and went off to do a marketing degree at Wolverhampton University. 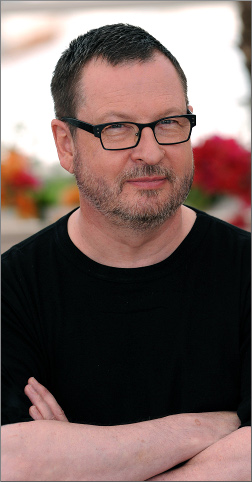 LARS Von Trier has been forced to watch every film he has ever made before being allowed back into the Cannes film festival.

The avant-garde camera-pointer, who is being punished for repeating an old Freddie Starr routine about Nazis, has been strapped into a chair with his eyes stapled open in a homage to an over-rated film that is still more than 800 times better than anything he has ever thought of.

Projectionist Tom Logan said: “At first things seemed pretty peaceful, like everyone else who has seen Breaking the Waves he cried with boredom and then fell asleep. Or at least he would have were it not for the eye-staples.

“Watching The Idiots merely made him realise the extent to which he has wasted his own and everyone else’s time, but when the opening credits to Dancer in the Dark came up, his screams were of the blood curdling nature you’d expect from somebody about to spend two and a half hours watching Bjork. In a musical. Where everybody dies.

“Before we’d got to the second song I’d lined up all the reels and gone outside for a stiff drink and a cigarette.”

The French film festival chose a particularly cruel punishment for Von Trier after initially resisting the temptation to furnish him with a list of known Jews and Communists amongst the artistic community.

Von Trier’s agent, Trier Von Lars, said: “Twenty minutes after he’d made the Nazi comments, a lorry driven by Mel Gibson pulled up outside the hotel with Woody Allen, Harvey Weinstein and about 50 others in the back and a note saying ‘gypsies and homosexuals arriving tomorrow’.”

But with Von Trier currently trying to kill himself while watching Antichrist, the festival insisted the punishment had sent the right message after Guy Ritchie was seen setting fire to a swastika and urinating on a photo of Herman Goering.