ARE you in enough of a frothing peak of sexual frenzy for Bridgerton season two? Take our quiz:

How do you spend your evenings?

A) Watching TV: it could be a documentary, a comedy show or even a sci-fi drama. After all, this is the golden age of television
B) Frottering myself frantically against the furniture while watching a period drama that has all the trappings of Bridgerton but without the glorious money shots

What do you look for in entertainment?

A) A strong plot, solid acting, to learn something new about the world and to be absorbed
B) Bonnets, bosoms, breeches, flirtation, smouldering lust hidden beneath aristocratic gentility and a lady in petticoats getting oral from a hot Duke on library steps

Have you read the novels of Jane Austen?

How are you sleeping at the moment?

A) Like a log. I’m so knackered I’m out the moment my head hits the pillow
B) I’m tossing and turning all night through, my mind writhing with dapper gentlemen in waistcoats, beautiful debutantes in corsets, elaborate masked balls, explicit sex acts performed in brocade-draped drawing rooms, wicked chaperones, being done from behind on a chaise longue, dowries, riding a Viscount in a four-poster bed, and the servants blushing as they hear me climax

Are you planning to watch the new Bridgerton?

A) Is that the period drama, is it? I don’t think I finished it. I preferred the one where the girl played chess
B) Yes! YES! YESSS!!!

Mostly As: You act like Bridgerton’s not the sexual event of your year, but beneath your whalebone stays you’re wild for it just like the Duke of Hastings was for Daphne. You little tease.

Mostly Bs: You think of nothing but Bridgerton night and day. It is your pinnacle, your release. You’ll binge-watch all eight episodes in one libidinous day then lie there, sated, covered in your own shame and regret. Then do it all over again the next day. 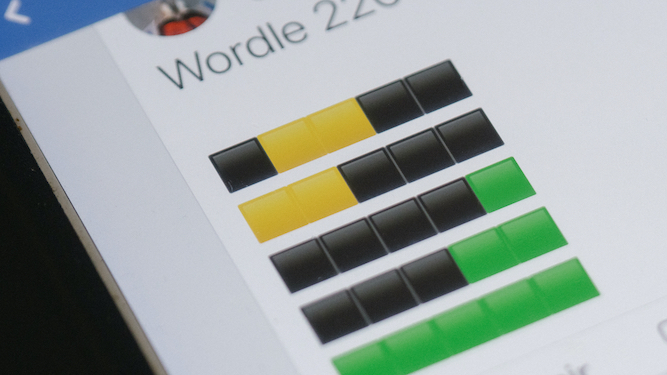 WORDLE has swept social media, with daily posts of some green and yellow square bollocks. You can’t do it and fail in these ways too:

Idiot, dunce, chump, moron, thick. All potential Wordle answers, and all describe your feeble attempts to join in a craze that’s ultimately some crossword bullshit. But at least you don’t depend on internet strangers for validation and self-worth. Utter twats, total arses, sheer knobs.

What was the point of being in love before Facebook? When you couldn’t shout every ‘quiet night in with this one’ to the world? And if you’re single? No one wants to see a post about how you went out alone, watched a sunset alone, went home alone and slept alone. There are algorithms custom-designed to hide that depressing shit.

Being a single man without a dog

If you’re a single man, your dog is your lone route to keeping your dignity. It has to be a proper man’s dog, a Labrador with an outdoorsy name like Bracken or Flint that you can take on long walks. Pictures of the pair of you atop a mountain looking pensively to the horizon will get likes. Without the dog? Sad.

Everything’s TikTok now, and every twat out there’s doing the latest moves to a rescued 80s pop song proving to the world they’ve got smooth hips and great rhythm. You’ve barely mastered clapping and look like a seal amped up on a gram of cocaine.

Not being rabidly partisan

Hardcore right-wingers who turn every minor incident into a resounding win for Boris rack up the likes. Hardcore left-wingers who still believe the Great, Decent Corbyn will one day return from the wilderness to redeem us all rack up the retweets. Meanwhile you, with your pathetically centrist views, are held in contempt by all.

Friends show off photos of themselves sipping cocktails by infinity pools in Bali. Your holiday photos are from a weekend in a freezing cottage in the Peak District. Sure, your fiscal prudence will pay off when they can’t afford to fill the car in three months, but that doesn’t stop you looking the wanker now.