Banksy defaces Banksy with another Banksy

CONTROVERSIAL GCSE-level urban artist Bansky has struck again, this time defacing a valuable Banksy mural in London, knocking tens of thousands of pounds from its value.

The artwork – depicting a policeman dressed in a gimp outfit being led around on a leash by the Queen, or similar – was valued at something in the region of £250,000.

But thanks to Banksy’s thoughtless vandalism, it is now worthless.

Matters are confused still further by the fact that Banksy defaced the priceless Banksy with another Banksy, which depicts a tiny Banksy defacing an even smaller Banksy.

“Either Bansky improves the existing Banksy by creating a new Banksy on top of the Banksy of Banksy defacing a tiny Bansky which was sprayed onto the original Banksy, or  a team of conservators works around the clock, restoring the piece for the nation.”

“If the latter, who knows how long it will take to restore this important statement and its painfully simplistic, risibly adolescent anti-authoritarian message to its original lustre?”

“I’m guessing about three minutes, given the right stencils.” 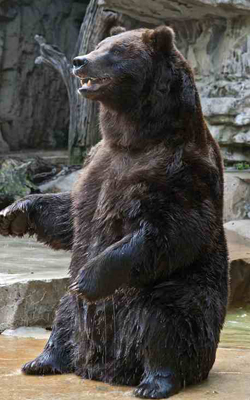 DAVID Attenborough has been embroiled in a row over the ethnic diversity of bears in BBC documentaries.

As the veteran broadcaster’s latest polar bear series hits screens, members of the North American Ursine Brotherhood have called for a boycott of all BBC programs until an equal opportunities policy is implemented.

Tom Logan, a 650lb grizzly from Wyoming, said “What’s a grizzly got to do to get a film crew up in this woodland, bitch? I been dodging hunters and scoring pic-a-nic baskets like a motherfucker and the BBC ain’t been documenting shit.

“But the moment there’s some white bear on white bear violence it’s all over the news. My brown brothers have been dying in mating and territory wars for years but the polarcentric media don’t want to know.”

The BBC has denied the accusation of racism, claiming some of their best documentaries are about grizzlies and have accused Logan of ‘playing the species card’.

They have asked him to call off his planned demonstration, which would involve several dozen seven-foot grizzlies roaming the BBC’s offices in Manchester, following fears for the bears’ safety amongst locals.

Documentary producer Roy Hobbs said “I think the continued existence of the badger in Britain and the recent introduction of the pandas to Edinburgh Zoo shows a good record of black and white bear integration in this country. Really? I thought badgers were little bears?”

“Nevertheless, we might be at the point where the polar bear has jumped the shark. And yes, you’re absolutely right to think what an awesome film that would make.”