THE BBC is to launch an experimental swearing channel to test whether anyone really gives a toss if the word ‘fuck’ is heard on daytime TV.

The new channel, to be based in Glasgow, will feature programmes including Shit Off In The Toss Attic and Bollocks Under The Fucking Hammer Wank.

BBC Director of Programming Nathan Muir said: “It’s just some fucking words. Who gives a shit? Is our entire fucking policy on swearing based on the offended sensibilities of half a dozen elderly cockheads with fuck all better to do?

“Shit, piss, fuck; it’s what all of us do, all of the time. What’s the fucking problem? Do these people fart rainbows and copulate by post?”

The channel will also feature an alternative version of the One Show, broadcast immediately after the BBC1 version, with the same presenters and guests, but with a tremendous amount of swearing.

Muir added: “If it doesn’t work, fuck it. But if no bastard complains then maybe at last we can call ourselves a civilised fucking country.”

Voters do walk of shame 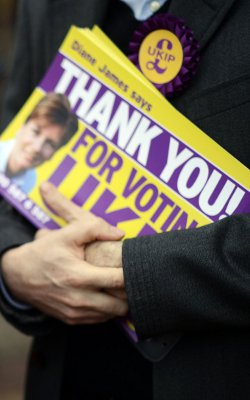 BRITISH voters have woken up this morning mortified about what they got up to at yesterday’s elections.

At polling stations across the country millions threw caution to the wind to indulge in their base desires in the privacy of a voting booth.

Voter Wayne Hayes said: UKIPs been courting me for months, flattering me about how kissably British I am and the great job theyd give me and the next thing I know I’m filling all three of their boxes. I feel so dirty.

He’s in the kitchen now, farting and shouting abuse at Radio 4. Ill slip out the bathroom window before he comes back upstairs and starts whispering to me about gypsies again.

I just hope my Polish wife Weronika can’t smell the fags and Theakston’s Bitter on me when I get home.

Polling station volunteer Margaret Hollis said: You could hear people whooping in the booths as they did terrible things to their ballot papers.

One man came out, leered at me and said I wouldn’t believe what he’d just done to my country. This is a church hall, the filthy beggar.

Others used the election to mend broken relationships, with many left-wingers ending disastrous flings with the Liberal Democrats to go back to old flames.

Labour supporter Nikki Hollis said: I should never have left my boring, vaguely dishonest party for such a set of spineless creeps.

Though I dont half fancy the Greens. They can renationalise my railways anytime.