Best film one you didn't know was on, have seen before and start halfway through when pissed

THE best film ever is officially one you have seen before, did not know was on and turn on halfway through at a good bit when drunk.

Movies like Citizen Kane, The Hurt Locker and Moonlight have been beaten hands down by seeing what is on telly and finding a Drew Barrymore rom-com that has already been going 30 minutes.

Film critic Grace Wood-Morris said: “Bollocks to Atonement. The best film experience any viewer will ever have is giving up on some worthy Oscar-winner to find ITV’s showing that Fast and Furious where they’re about to parachute cars out of a plane.

“There’s no feeling like being half-cut and opening another bottle of wine to discover some shit starring Hugh Grant and Sandra Bullock’s on and it’s actually loads funnier than you remember and Donald Trump’s in it.

“Do you want to see a compelling film with outstanding performances about a major social issue? Do you f**k. Will you stay up until half-one to see the end of X-Men: Apocalypse, even though you’ve no idea who any of the pricks are? Yes.

“To reflect the average viewer’s experience, the Bafta Academy are going to stumble across all next year’s nominees at 11.30pm on a Saturday while well on the way. And they’ll all be the greatest f**king film they ever saw.”

Stars In Their Eyes, and other TV shows that might have been a bad dream 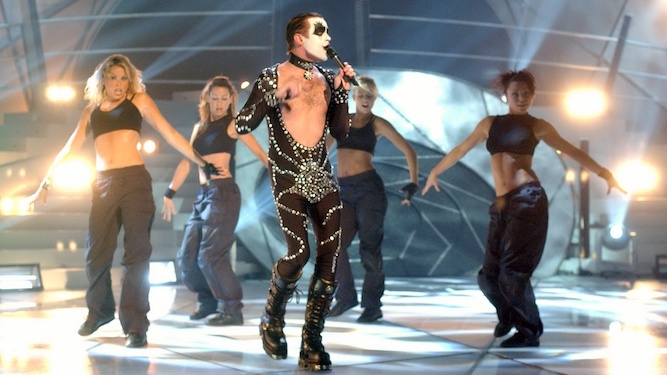 IT can be disorientating trying to recall a dream, but it’s worse when you realise that the dream was actually a real TV show. Here are the oddest:

Stars In Their Eyes

Witnessing a meek accountant from Swansea walk through a smoky doorway and magically become a shop-soiled Robbie Williams is definitely the sort of thing that only happens in a dream, right? Not if you were watching ITV in the 90s. That was our bizarre reality.

You must have been asleep on the sofa. There’s no way you could have watched a programme where children are screamed at and covered in gunk by two grown men, and sometimes Ian Beale from Eastenders, broadcast live at 9am on a Saturday morning. It’s too weird to have been real.

The horrible combination of snooker and Jim Davidson is something only your subconscious could throw up. Factor in the nonsensical but sinister phrase ‘I’m going to be snookering you tonight’ and you’ve got the makings of a very creepy dream. Except you were awake and it was on every Saturday night for a decade.

Clearly an anxiety dream and not a real show. Who in their right mind would go on TV, reveal their entire naked body apart from their head, and have their genitals forensically examined by a stranger, an overexcited host and a viewing audience of millions? Only a particularly deep REM cycle could create that freakish situation, surely?

So there’s this woman who pretends to be a doctor, right, who makes people put every single item of food they eat during a week on a massive table while she shames them for it. And then she makes them poo in a Tupperware box and give it to her so she can sniff it. No one would put something that mental on TV, so it must have been a particularly f**ked up nightmare.