Big Brother Housemates Rise To Over 200

SIXTY-FIVE new housemates, including a platoon of Gurkhas, were introduced into Big Brother last night, swelling numbers in the show for its tense final week to over 200. Around 97 new contestants joined the house in the previous seven days while another 42 were evicted. Six died of natural causes, 11 committed suicide and four have simply disappeared, although the fear is they have been eaten.

A further 19 died in a violent factional struggle provoked by Big Brother on Tuesday, while two were killed in a knife throwing accident during a dangerous 'circus skills' task, which also led to one housemate being hospitalised with lion bites.

Jaz Jankel, series producer, denied the show had lost momentum because of the constant changes in personnel, which even led to one housemate, Pudding, being ejected and restored 17 times before she was ripped apart by an angry mob during her last eviction night.

However, he admitted that no one knew for certain who was in the house anymore, or even whether any of the original occupants were still alive, but then promised “a great final week”.

He said: “The Gurkhas are some of the most feared fighting men in the British army. If they can’t finish off the rest of these pathetic fuckers and end this misery for ever, no one can.” 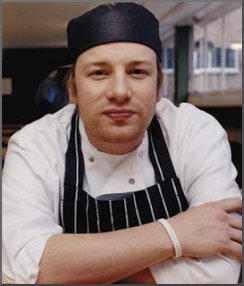 THE number of people leaving Britain because of Jamie Oliver's face has risen for the second year in a row. Thousands would rather live without proper sanitation

Official figures show that more than 380,000 started a new life overseas, unable to endure another second of the grinning chef.

Roy Hobbs, an electrician from Falmouth, said: "I decided that my family and I would be better off in Basra rather than have to look at that cocky little shit every day for the rest of our lives.

"Life in Basra is unbelievably dangerous, but we've sided with some particularly ruthless Shi'ites and the kids are just so relieved not to have to eat whatever that fat-lipped sod tells them to."

Janice Harper, a physiotherapist from Minchinhamptonsteadbury, said: "I walked into my local Sainsbury's last October and every single product carried a picture of Jamie Oliver.

"All the store announcements were in his voice and there were huge video screens showing him and his trendy mates eating beer battered fish and garlic roasted chips. I put my house on the market that afternoon."

Harper now lives in the hills outside of Barcelona and has threatened to poison the local reservoir if Oliver comes within 250 miles.

A Home Office spokesman said it was unfair to single out Jamie Oliver and insisted there were many reasons for people to leave the UK.

He added: "What about Richard and Judy's Book Club? That's a good one."