Britain not cleverer than Simon Cowell

MILLIONS of X Factor conspiracy theorists have convinced themselves they are cleverer than Simon Cowell, thus proving the opposite.

Dorito-munchers across the nation are quite certain they have outwitted the billionaire karaoke mogul after figuring out Simon Cowell’s various voting/judging ‘scams’ from stories given to newspapers by Simon Cowell.

X Factor viewer Nathan Muir said: “This might blow your mind a little, but the whole thing’s totally rigged. In fact you might as well call it ‘the Fix Factor’, ha.

“Yeah. ‘Fix Factor’, that’s pretty good. I thought of that.”

He added: “Simon Cowell would have to get up pretty early in the morning to catch me out. I mean, it’d take more than some fairly standard PR jiggery to get me reading and talking about his television program.

A television industry source said: “Simon Cowell is one of the nation’s wealthiest men for a reason – his innate cunning would make an especially audacious fox look like Rodney from Only Fools and Horses.

“Meanwhile your median X Factor devotee has about the same intellectual machinery as a crude 1980s chess computer.

“A carefully-orchestrated whiff of conspiracy will allow said viewer to exercise his or her limited mental faculties to ‘fathom it all out’. This simple process gets the viewer engaged with the show and gives them the same sort of satisfaction that a squirrel might get after pulling out a matchstick to get a nut.

“It’s a classic PR move called the ‘reverse moron’ or ‘the fuckwit paradox’.”

Anger as Thatcher depicted without her fangs 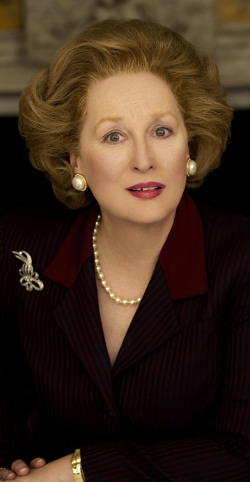 A CAMPAIGN has been launched to boycott the new Margaret Thatcher biopic after producers omitted the former prime minister’s trademark fangs.

Instead Oscar-winner Meryl Streep portrays Thatcher as a relatively normal looking woman without the four-inch long upper canines that she often used to gouge massive holes in innocent nurses.

Tom Logan, a grade seven Guardian reader from Finsbury Park, is organising a nationwide boycott of The Iron Lady and has urged people to compare the film to Hitler.

He said: “I sat there for two hours, waiting patiently for her to kill a midwife and eat it. It’s the sort of blatant historical revisionism we’ve come to expect from the same people who brought us Mamma Mia.

“I used to like Meryl Streep, but now I’m calling for her to be sacked from everything.”

Helen Archer, a full-time Unison official from Stevenage, said: “At the end I stood up and started shouting ‘shame, shame’. No-one joined in because they were even more shocked and angry than I was. But at east they portrayed Dennis as a horrible racist, so I’ll give it two out of five.”

Meanwhile, the film has also been attacked by supporters of the former Tory leader who claim it suggests she is no longer prime minister while also depicting her as being so old that it raises the possibility she might eventually die.

Former chancellor, Norman Lamont, said: “There’s one scene where she’s talking to Dennis but he’s not there, because he’s dead. So if he’s not there then she can’t be talking to him which means they’re claiming she was wrong.”

And former transport secretary, Cecil Parkinson, added: “She’s still as sharp as a tack. And to prove it she pushed this tack into the back of my hand.”