But who was minding the caff? ask EastEnders viewers

EASTENDERS has revealed who killed Lucy Beale without answering the crucial question of who was looking after the cafe at the time.

After a series of red herrings lead them to believe Max Branning was behind the counter while Denise Fox looked after the car lot and Carol Jackson ran the Minute Mart, followers of the soap are angry their key concern was unaddressed.

Fan Donna Sheridan said: “Newcomers to EastEnders might think it’s all about murder, or family relationships, or a constant, soul-destroying parade of misery.

“It’s not. It’s all about who’s been left in charge of various small businesses.

“Whenever someone needs to do a killing or have an affair or give birth to an illegitimate child they always ask someone to mind the stall for them, knowing that viewers would be in uproar if a vendor of £6 crop-tops was left unstaffed.

“The reintroduction of Kathy Beale had me agog – as well as being Ian’s mum she’s got experience as landlady of The Dagmar, so there are all kinds of areas she could fill in – but frankly we’ve been left hanging yet again.”

The revelation that Lucy Beale was murdered by her 11-year-old brother Bobby has been largely ignored, because the character is too young to work in a customer-facing environment and therefore irrelevant. 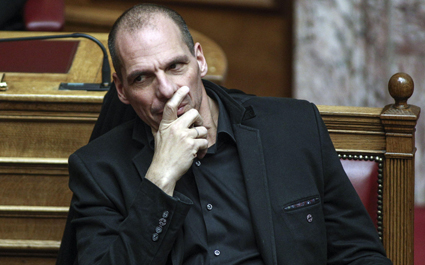 GREEK finance minister Yanis Varoufakis has expressed astonishment that the EU is still asking for the money he gave back in the pub weeks ago.

The Greek says he cannot recall the exact date but it was the day Bradford beat Chelsea.

Varoufakis said: “I gave Merkel a big wedge of cash that night. Ask the Belgians, they’ll tell you.”

Angela Merkel confirmed that this was the case, but she said the money was “just so I could get his round in for him. He was sat in the corner and couldn’t get out because Francoise Hollande and his girlfriend were having a row at the next table.

“The previous Greek government said they gave the money to my husband to give me when they bumped into him outside a cinema just after Christmas. They must think I was born yesterday.”

EU commission leader Jose Manuel Barosso backed Merkel: “If it was a loan repayment he should have got a receipt.”

Varoufakis responded that he had, but that he had washed his jeans the next day, and it must have been in the back pocket because everything in that load had little bits of paper stuck on it.